Coocoo for a cocoa clipping!

My wife, Jane the Voodoo Queen, gave me a clipping from a recent catalog she received of a, um--well, I'll say interesting candy product for sale. I scanned it for you: 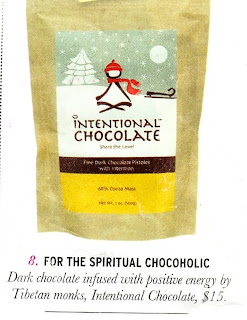 You see the "interesting" part? No? Here, I'll circle it: 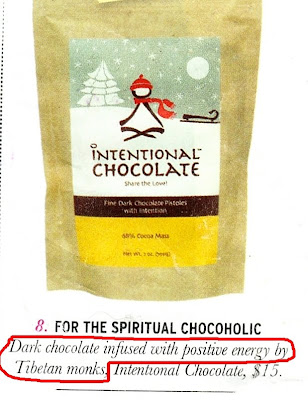 That's right. Fifteen dollars for approximately the same amount as four-and-a-half regular chocolate bars. But that's because of it's special ingredient: positive energy (or "intention" as it says on the front label) from Tibetan monks! Well, that's a bargain! It won't repel Chinese soldiers, but it'll make your chocolate better, somehow!


UPDATE: TDSH has been contacted by food inspectors, who report that the latest batch of Intentional Chocolate is subject to a voluntary recall. Several customers have complained of having their mellow harshed after eating the metaphysically-infused candy. It is believed that uncontained bad vibes from some disgruntled employees at the packing plant contaminated several lots. Bummer!

This chocolate choked my chakras! I demand a refund!

At the dollar store you can find cheap Unintentional Chocolate.

It's a good thing that they didn't have me working the line when I had my last episode of PMS!

You think there are too many wars now... :P

That was hilarious! Thanks for the giggle.