Cool Ass Kalls Me Kreativ! I Kid You Knot! 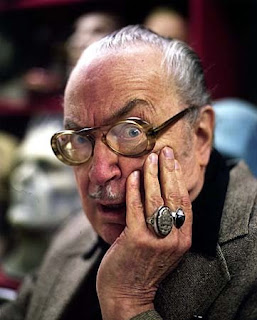 One of the very nicest things ever said about my me or my blog was said last month by Brian Chiba at his blog, Cool Ass Cinema. He said of TDSH, "If the wonderful Famous Monsters of Filmland magazine had an adult oriented sense of humor, the result would look something like this blog...It's a very creative site that monster fans who like to laugh should check out."

I don't know Brian, so I was unprepared for the compliment, but I was very touched. As someone whose life was partly shaped by Forry Ackerman and FMOF (props to Jim Warren too, of course), I couldn't have been happier to be compared to famous "Uncle Forry." Thanks, Cool Ass!

But I do know Brian's blog. Cool Ass is "A site dedicated to the propagation of strange and exciting cinema (and television) from all over the world as well as America's own grand tradition of exploitation cinema classics." In other words, it showcases the best of the worst, the weird, and the trashy. In more other words, it's fun! Cool Ass Cinema is dedicated to helping readers remember "those classic (and sometimes classless) films of old, and even discover some new ones," as it says on its banner. A great mission.

So now I have a new badge-o-honor to wear here! Although, having seen variations of the award at other blogs, I'm not sure it's a badge, or-- 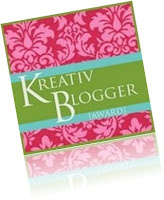 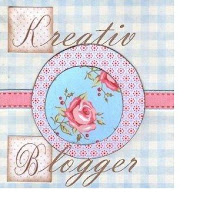 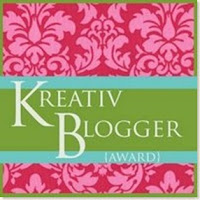 --a tablecloth, wallpaper sample, or napkin?

Or even possibly a graphic from a futuristic aspirin commercial: 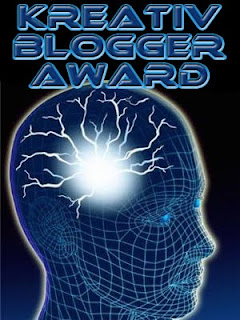 My first reaction to seeing the badge was one of laughter..."KREATIV? So maybe one of the creative aspects celebrated by this meme was spelling? "KREATIV"? (I was guessing it was started by a marketing person at the "SyFy" channel.) So I did a little poking around to figure out how that spelling started.

Oog! Was I wrong! The award apparently started with a German-speaking blogger; "kreativ" is the German equivalent to the English "creative." Ist gut, ja! (That'll teach me to shoot my mouth off! But I can't help it--I'm a son-of-a-gun!*)

Which graphic do YOU like best? Or maybe it should be this one I knocked out-- 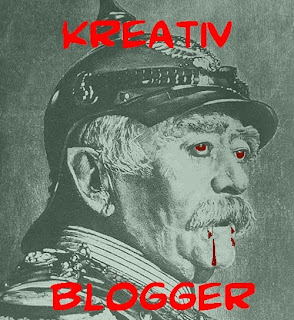 Who knew Bismarck looked so much like Bram Stoker's description of Count Dracula?**

*My daddy was Lewis Grizzard. Or not.

**Hey, before I get hate mail, many of my ancestors were German!
Posted by Max the drunken severed head at 12:50:00 AM

Congrats on the award, you blog definitely deserves it! And that Bismarck award is awesome!!!

Thanks, Shelagh! Thanks your Amphibian Awesomeness!

You deserve the accolades, Max. The first time I stumbled upon your site, that was the first thing that popped into my mind. FMOF was a big part of my life growing up. Granted, I didn't begin collecting the magazine till the late 70's-early 80's, but it was essential in instigating my love for monster and horror cinema as a small fry. Since then, I have amassed around 150 issues (give or take a few). But your site captures the spirit far more than that 90's version of Famous Monsters could. The publication, Scary Monsters Magazine, likewise has the same spirit as Uncle Forry's classic fright mag.

And I think that vampiric Bismarck is awesome!

Oh, I can't believe I forgot! I must say that I am equally flattered for your kind comments about my site, Max! Thank you very much!