The latest addition to my back yard

When the snow falls heavily and covers the ground well , I feel afraid of what might lie beneath it, lurking. Well, the snow got pretty deep in places in here in Pittsburgh this month--a pretty, silent, white blanket piled up over everything. It was so beautiful and picturesque that it seemed to make the outdoors seem so, well...safe.

But hoo boy, was I wrong!

By late last Saturday afternoon, the top few inches of snow had melted away. As the sun started to sink below the horizon, I began hearing faint "crrr crrr" sounds in my back yard. What was it, I wondered? Hibernating groundhogs stirring? (I have seen a few here last Spring.)

But then I began hearing what sounded like soft chuckles--

I called for my wife Jane to protect me, of course. (A severed head has no choice but to be a coward, being defenseless.) Thank Cthulhu she knows powerful voodoo!

She went to investigate. Fortunately, she took our camera, and so was able to capture a rare picture of a Fossor Non Mortuis (or "ghoul clown," as some of the locals around here call the murderous pests) as it was breaking free of the snow: 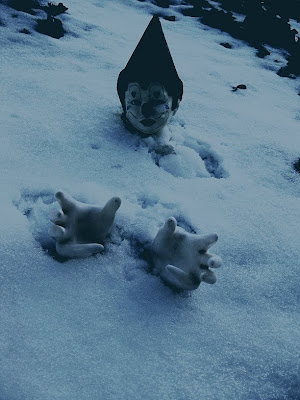 She quickly hexed the hell out of it (with a charm involving circus peanuts, seltzer water, and eye of newt), and it died before getting free of its confinement in the cold, crusty cover.

The thing's still out back, and I'm leaving it there as a pleasant yard decoration. I'm sure the littlest youngsters in the neighborhood will get a kick out of its festive face. I know I do, now that it can't won't eat me! I sure I hope it doesn't start stinking anytime soon. (I'd have to douse it with alcohol, and I don't wanna share.) 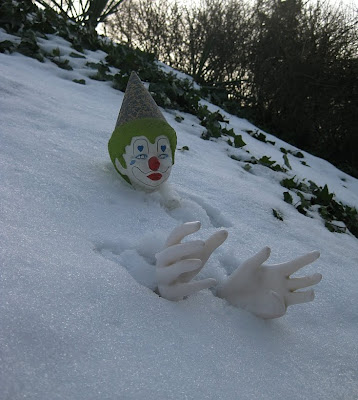 It lifts my spirits to see it there--now I'm whistling John Phillips Sousa tunes around the house!

Hey, wait-- something just occurred to me: can dead ghoul clowns become zombies?
Posted by Max the drunken severed head at 1:55:00 AM

I always found marionettes to be way scarier than clowns.

That one looks like it may have some Zombie potential. His hands are all ready to grab someone! I'd watch it while rolling around in the backyard.

Remind me to send Ubermilf a clown marionette.

I must get the name of your landscaper. That is the bestest yard decoration ever!

Hey, if any more surface, I'll send one to each of you (dead of course) if you'll just send me your addresses...

Yikes. Just looking at those pictures gives me the creeps. I don't like clowns, no matter how inanimate they are.

GREAT! Getting the creeps is always a delish Xperience!