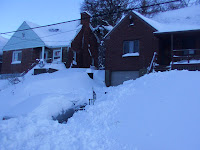 Got buried under snow last night and today by a snownami!

Boy, did the Snow Fairy visit us here in Pittsburgh! (But at least he left me a car--I found it under a huge pile of snow in my driveway!) We broke a 63 year old record for snowfall in one day, and not since since 1994 has there been this much snow on the ground. Two feet or more, (depending on where you live in the county) with drifts even higher.

Had to be attached to my early model android body (which is always breaking down) to go help clear a path to my car and the street. On the way back to the house had to be dusted off when my head got dropped in the snow and rolled down my front yard! (Thank god there was no yellow snow.)

But tonight I ate homemade snow ice cream, something I haven't had in 15 or 20 years. Yum! Snow, half and half, sweetener, cocoa, vanilla and a dash o' salt. The horrors of the day melted away while I ate the stuff.

Our county is in a declared "state of emergency." Probably will be lifted in the next day or so, when the plows and salt trucks catch up. Most businesses did not open today. So I didn't have to call off, thank goodness. Even if my managed to get dug out in time, I'm not sure I could safely drive down from the hill I live on. And even if I could, I'm pretty damn sure I could not drive back up!

Of course my wife is in Florida right now!

To see the photos I took today, click here.
Posted by Max the drunken severed head at 11:52:00 PM