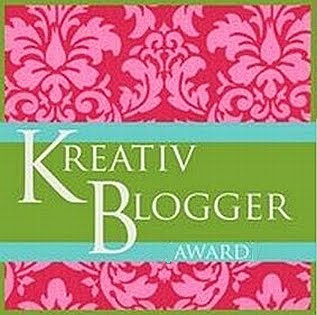 Below are my honorees for the Kreativ Blogger award (translation: virtual pat on the back--or head), which was recently bestowed on me by Cool Ass Cinema. (I blogged a few days ago about that; scroll down a bit to read that post.)

Haunt Style This blog's theme: "Images, ideas, instructions, and information for people who live for Halloween, or just want to add some creepiness to their lives." Hey, who doesn't?

A Patchwork of Flesh A site for artists working in any and all media, living in all points on the globe, and of all ages, to celebrate Mary Shelley's immortal Frankenstein monster.

Skull-A-Day A creative, constantly updated exploration of the skull image in all media. Originally, a skull-a-day posting project by Noah Scalin for an entire year; now reader submissions make up the majority of posts. You'll never see so many variations on one interesting theme anywhere else.

Uranium Cafe Bill Courtney's rad blog of retro madness and great podcasts is an act of courage. It is posted from China, a very repressive place to both surf the 'Net, and upload to it.

Billy Loves Stu Although he can't spell "stew" correctly, and never seems to post any recipes, Pax Romano's blog is creative, queer, and fun for all horror movie fans, whether you like classic or contemporary stuff.

I Love Horror I'm giving the award to Brad McHargue's blog because I like his sense of humor, his enthusiasm, his sometimes grumpy but honest persona, and to give him a kick in the ass to get his delayed "Ash Across America" project on his blog!

Under the rules I accepted this honor, I have to post some things about myself and pass on the award to other blogs. I'm going to do that, but in reverse order. (Hey, I don't wanna steal the top billing from these great blogs I'm recommending to you!)

Seven things about myself:

1. I once threw a dinner party at a funeral home. At dusk, we played hide and seek.

2. At one time I was a professional crime fighter.

3. In my twenties, I auditioned in the nude for a play, as required for the part. This was for an acclaimed comedy, and the auditions took place in a Methodist church.

4. I once had a life-size statue of St. Patrick in my home.

5. I have been tricked into going "snipe hunting."

6. I once caught 105 catfish. (Okay, they were only fingerlings, and I caught 'em all at once, but still it was 105! They were freed into a pond.) Another time I caught a fish using only a milk crate.

7. I once used a mold to make plaster busts of John F. Kennedy as a jello mold for a party.

Let's see my honorees top that! (But only if they want to.)
Posted by Max the drunken severed head at 4:47:00 PM

Was it an acclaimed comedy BEFORE you auditioned nude?

that was one of the funniest comments ever left at my blog! Thanks!

Thansk a lot and you have done wonders with your Blogger theme here. Keep up the great work.