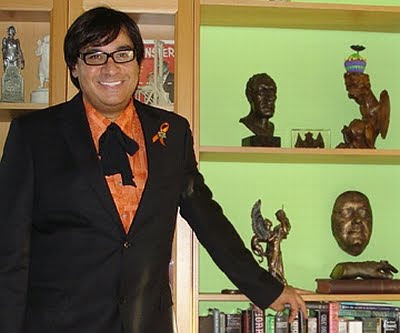 I sent him questions about his current Rondo Award nomination in the "Best Fan Event" category, for his popular "Tribute to Forrest J. Ackerman" at Grauman's Egyptian Theater in Hollywood. Joe sent me back some fun answers. Amazingly, he said he wanted to interview me at his blog! Not only does an interview with me appear there, but Joe also endorsed TDSH for "Best Blog" in the Rondos! I'm monsteriffically happy!

Well, I think my event was nominated because it was fandom's farewell to their favorite Uncle. When it comes to promoting classic Horror, there's no greater example or inspiration than the original Pied Piper of fandom, Forry! Also, the tribute itself was a phenomenal alchemy of incredible emotion and uplifting camaraderie the likes of which many (including me, and I've been around) have never experienced before. Truly special.

2. Let's say you win. What will be the first thing you do?

Depends on who's in attendance...

4. Other than B-horror movie actor Rondo Hatton, who do you think the award looks like?

The love child of a drunken menage' between Jay Leno, Jack Palance and Alice the Goon.

I think anything that represents the origins and landmarks of our genre OR anything modern that is clearly tethered to or promotes classic genre quality by influence or inspiration.

6. What should I wear to the award ceremony?

Thanks for your time! Peace, Joe. 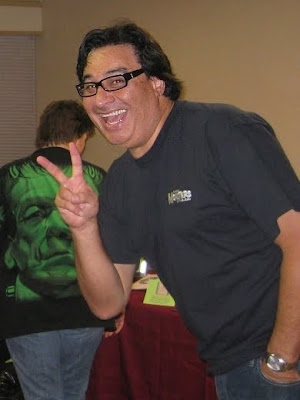 Joe Moe is a third generation Polynesian entertainer (look for his cd MAINLAND), and an authentic renaissance man. Fun facts about Joe: He once sculpted a monster mask for Don Post Studios (“Schizoid”), once operated the front half of Muppet character Snuffleupagus ! Joe lived for many years with the late genre legend Forrest J Ackerman in the Ackermuseum of Sci-Fi, Fantasy & Horror, and was celebrated at last year's Rondo ceremony for his "quiet, constant and unwavering stewardship of Forrest J Ackerman's final decade of life." Joe Moe's day job finds him gleefully occupied in making intriguing movies like RED VELVET, WASTED SPACE and other Indie films. Joe was most recently Creative Consultant on Tim Sullivan's 2001 MANIACS: FIELD OF SCREAMS (due out this year).