Celebrating the 75th Anniversary of BRIDE OF FRANKENSTEIN Frankensteinia, Pierre Fournier's superlative blog* on all things related to the King of Monsters, is celebrating the 75th anniversary week of the release of Bride of Frankenstein, one of my all time favorite films.

You owe it to yourself to join the party-- check out all his posts from April 18th through April 25th. (Above right: A modern recreation of Elsa Lanchester as the Bride, by Ukrainian photographer Aleksey Galushkov, from the site Retroatelier.)

Prior to his posting on the various women said to be considered for the role played by Elsa, he and I had a few laughs suggesting other thespians for the part of the Bride: shrieking skinny-Minnie Una O'Connor and a few others. One I suggested was Ernest Thesiger, the waspy British actor who played Dr. Pretorious in the film. We got a few laughs outta that, but not as many as the ones I got from this photo of Thesiger in drag: 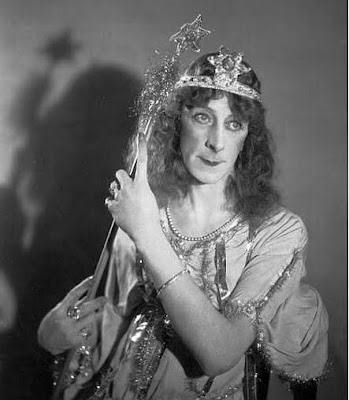 Thesiger almost appears to be trying out for the part of Glinda the Good Witch!

Pierre sent the photo to me, and identified it as one taken January 15, 1925 at the birthday party of British entertainer Ivor Novello; Thesiger was dressed as "the Fairy Queen."

Interesting facts about Thesiger: he wrote the book Adventures in Embroidery (and taught the current Queen Elizabeth II how to embroider when she was a child), and is alleged to have referred to himself as "the stitchin' bitch." Believe it-- or not.

Well, I've gotten far afield of the subject line of this post, but whadda ya gonna do? Sue?

You want tight posts that don't go astray for the sake of a cheap laugh, then head to Frankensteinia. You'll be glad you did.


*As opposed to my blog, which is superfluous.
Posted by Max the drunken severed head at 2:08:00 AM