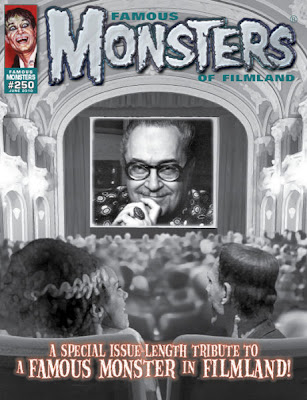 Well, maybe that should read "Instant Karma for a Famous Monster", or something.

Famous Monsters magazine, which was a part of my growing up, has changed hands twice. The original editor, Forry Ackerman, was an eccentric but affectionately-regarded influence on a generation of monster-lovin' kids like me.

FM's second publisher, (nameless here forevermore) who had ongoing battles with Ackerman, was set to end his run of publishing FM with Issue # 250. It was, according to some accounts, going to be an anti-Ackerman ish, as a final spitball aimed at the late "Uncle Forry" (as Ackerman was often called by fans of the old FM.)

But new FM publisher Phil Kim, and editors Jessie Lilley and Michael Heisler, who have taken over the long-delayed job of bringing issue 250 to print, will have issue# 250 pay respect to the original editor instead! Forrest J. Ackerman is at last appearing on the cover he helped popularize. And instead of bile in the contents, good-natured tongue-in-cheek tributes (Ackolades?) to Ackerman's numerous, often-spoofy film cameos will be featured instead.

One of the earliest memories I have of looking at ANY kind of magazine was looking over Monster World, a Warren Co. magazine that was the "sister" mag to the better-remembered and more celebrated Famous Monsters of Filmland, which I later saw for the first time when I was seven years old. The covers for both mags nearly always grabbed me and made me want to know more about old horror movies. I'm still grateful to Forry Ackerman for this, and he's missed by many fans.

The cover of 250 grabs me, too, and I'm grateful to the new FM team. I'm going to buy a copy of this issue (and the issues to come after), and if you remember the original Famous Monsters magazine fondly, you'll want to, too! 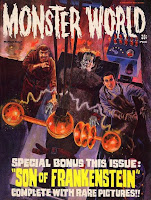 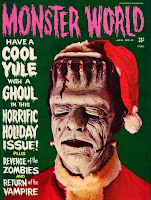 Images for the old FM and MW covers comes from the highly enjoyable Monster Magazines blog.
Posted by Max the drunken severed head at 1:01:00 AM

Here's to FM enduring for many more years!

I'll drink to that!

P.S.: The word verification I have in front of me is "ACKshi"-- no kidding!

The idea of a whole new generation of Monster Kids makes me giddy in all the wrong places. Can't wait to dig into the first issue!

My word verification is saponsti.

Yeah, I don't know how to feel about that.