From the Famous Monsters Noose Department:

Click HERE to get your tickets online and avoid the lines!
With only about a week until monsters and mayhem take over Indianapolis, IN for the Famous Monsters Convention, FM is proud to announce some new additions to the guest lineup. Veteran horror actress Danielle Harris (the Halloween franchise) will be on hand at FM Con. Besides appearing in Halloween 4 and 5 as Jamie Lloyd, and in the Halloween reboot as the ill-fated Annie Brackett, Danielle will soon appear in the films Hatchet II and Stake Land (both of which will be covered in the upcoming FM #251) as well as William Forsythe directed vampire flick New Blood. 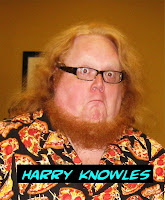 Harry Knowles, Steve "Capone" Prokopy and Jarrell Jay "Father Geek" Knowles of movie megasite Ain't It Cool News will be among the attendees. Harry's nephew, who played The Kid Zombie from the movie Pathogen will be in attendance and it will be his first con. (It's a time-honored male rite of passage!)

Unfortunately, due to scheduling conflicts, actresses Margot Kidder, Lori Cardille, and Kim Myers will be unable to make the convention. We here at FM wish them the best and hope to see them next year.

The city of Indianapolis has shown Famous Monsters great affection spearheaded by the mayor, who will be performing the ribbon cutting ceremony to start this year's FMCon. Guests will be arriving Thursday and into Friday afternoon escorted by a police motorcade from the airport to the Wyndham Hotel. Want to be on TV? Come to the Wyndham at 6:30, 7:40, and 8:40 AM Friday July 9th. The local morning show on FOX TV will be at the convention before it opens to air three live segments to kick off the con.

At the convention you will have the opportunity to register to win door prizes from Sideshow Collectibles all throughout the weekend.

Don't forget, it's not too late to avoid lines at the ticket booth. Preorder your FM Con tickets from www.CaptainCo.com today!

"When there's no more room in Hell, the dead will walk Indianapolis."

Sounds like fun! Too bad I'm too far away. :(
You have a wonderful time though and tell us all about it!

I will do that, dear Laura.

Wish I'd see you there!