[Part 2 of my exclusive sneak peek at the "new" Famous Monsters magazine. It's jam-packed with stuff! Films! TV! Art! Fiction! Ray Bradbury would be proud of the enthusiasm on display! I'm enthused too! This FM will be educational for youthful readers like the old FM, and I believe make more "normal" adults into horror film geeks like me! Mwah ha ha ha!...Here's the rest of the articles not previewed in Part 1.]

This look by April Snelling at upcoming releases from Dark Sky Films is an FM exclusive, with photos that won't be seen elsewhere. So I can't post 'em here!

Dark Sky Films was created six years ago by MPI, one of the first and largest home video distributors in the world. Dark Sky is the dvd arm of MPI, succeeding the old Gorgon Video. Dark Sky, has released a number of lesser known or forgotten genre indies like the 1964 schlocker Horror of Party Beach, Horror Hospital, the original Texas Chainsaw Massacre and others. Now they're expanding into production, teaming with indie company Glass Eye Pix. Famous Monsters 251 gives us a look at their upcoming Creature From the Black Lagoon-inspired film Hypothermia, old school-slasher Hatchet 2, and a vampire road movie, Stakeland. 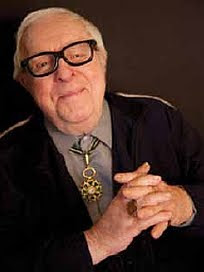 In this interview Bradbury describes friendships with many famous people, talks of his love for the great genre art of Hannes Bok, and recounts his experiences writing musical versions of his stories. It's very touching to see that the old master of dark fantasy and sci-fi is just as enthusiastic at age 89 as ever. The interview is followed by--

NIBLICK IS THE NAME

An exclusive NEW story by Ray Bradbury! (This is a major coup for the magazine, IMHO.) It's a short-short that in just one examples explores the emotional importance of imagination, a theme Bradbury never fails to find some new way of expressing. 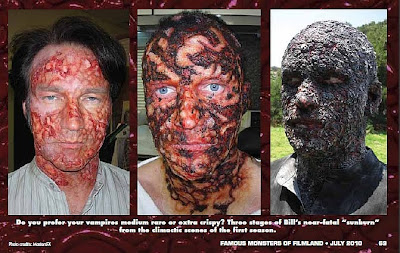 This article by Joe Nazzaro at the hit TV series (and my wife's favorite show) is sure to please the fans of the series' bayou bloodsuckers. It begins with a look at the special fx and makeup for the series, Also included is Dark Times in Bon Temps: An Interview with Charlaine Harris by Jeff Marriette, and Almost True Confessions: Season Three Teasers from TRUE BLOOD’s Alexander Woo, by April Snellings. Color the fans blood red with happiness. 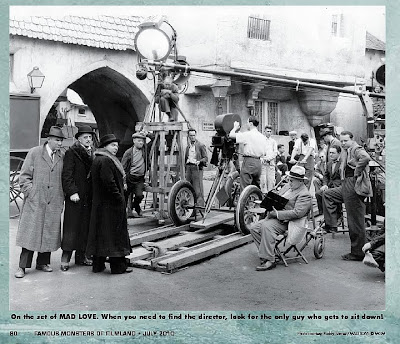 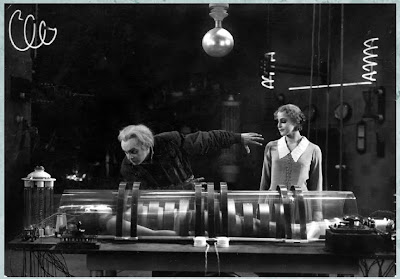 A modest Bridgette Helm proves to be too far away from Rotwang's hand in this shot from METROPOLIS.

THE VISUAL JOURNEY OF KARL FREUND

An examination by David A. Nalmod of the life and work of Karl Freund, the great cinematographer and director who worked on many German silent classics like Metropolis. He also shot or directed important American horror films like Dracula and The Mummy. 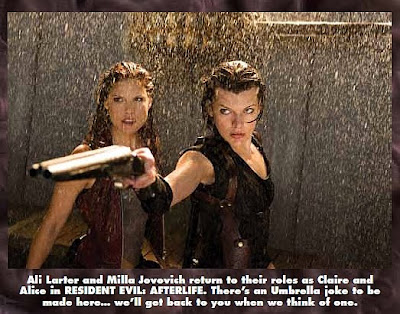 See more of this banana-peel ghoul in Famous Monsters #251.
LIFE BEFORE AFTERLIFE

FM Editor Jessie Lilley examines the entries in this popular Resident Evil film series (based on the equally-popular video game), and tells us what to expect from the next chapter, Resident Evil: Afterlife. Some surprises and nice photos. Also includes some surprising history on 3D films and clears up misconceptions about the stereoscopic process. Informative-- and now I want to see more of this series. 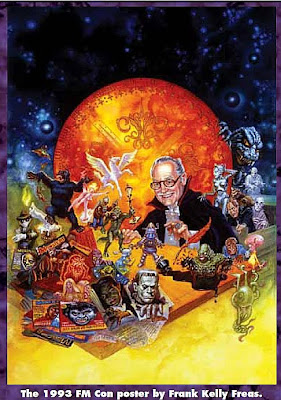 This auspicious "debut" issue of the revived magazine made famous by Forry ends movingly. Showcasing nearly 50 beautiful, informative and even funny tributes to FM's First Deaditor by fans of "Uncle 4E" and the original incarnation of Famous Monsters, these contributions come from young and old fans from all walks of life. (I also sent in a piece as well for the section, but I believe I sent it too late to be considered-- darn!) You'll smile at these touching remembrances. 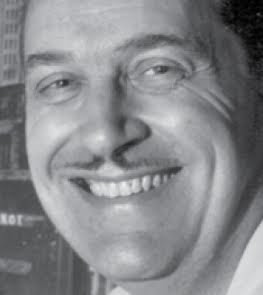 Somewhere, somehow, I hope that Forrest J Ackerman is reading issue 251 of "Famous Monsters 3.0" and grinning from ear to eternity...

Thanks for the sneak peek, Max! I'm looking forward to getting my (one to four) copies!

What about Captain Company? You Axed for it?

Hey Max! I just got invited to go to Famous Monsters with some friends of mine. We're going Saturday so I hope to bump into yall there!

Captain Company is back in full force!

Thanks for the comments, kids!

Can't wait to see you Holly!