A review and interview in THE TWILIGHT ZONE 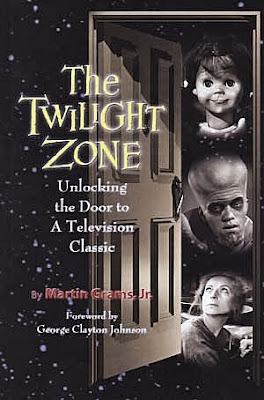 I may be a severed head with a sobriety challenge, but in many ways I'm a lucky man. For example, people send me free stuff all the time. Like no-budget independent films on dvd-r. These make wonderful shiny coasters for my highballs, and I like having shiny things around. Gotta have something to focus on after the third zombie and I can't see the TV so well.
But I digress. I have gotten some good movies and books for review, and earlier this year I scored a copy of Martin Gram's reference book The Twilight Zone: Unlocking the Door to a Television Classic. A winner of the 2008 Rondo Hatton Classic Horror Award for "Best Book of the Year," it is no longer in my "review" pile or my "giveaway/donate" pile, but on my shelves next to another indispensable reference book on classic genre TV, David J. Schow's The Outer Limits Companion.

I had wondered about the necessity of another reference book on the Twilight Zone series; Marc Scott Zicree's The Twilight Zone Companion is a well-known, well-respected and oft-reprinted tome on Serling's classic series. But Grams has contributed much new information on the show by his own research. This included conducting new interviews with some of TZ's actors and crew members, examining Serling's correspondence with a host of people, and doing other research from original sources such as the show's financial ledgers.

Besides plots, casts, and other facts on each episode, Grams details the costs of each, which surprisingly varied considerably from episode to episode. Importantly, for those readers who already have Zicree's book, Grams gives greater attention to the show's final two seasons of it's five year run, chronicling how Serling increasingly lost influence over the series' production after the third season.
The Twilight Zone: Unlocking the Door to a Television Classic is a book to consult, and/or dip into for a short spell. It isn't a critical review with expressed opinions by the author. Clearly, Grams DOES admire the series and Serling. But the book is a chronological history loaded with info. This makes the book not only scholarly but generally an enjoyable read as well. Sometimes the immense amount of info can be a bit of a slog, but for the most part the trip through the "Zone" is well-worth your time and the price of the book.

The book is most fascinating when it describes Rod Serling's relationships with executives, writers, and other people connected with the show. I particularly enjoyed reading about the friction (and a resultant falling out) between author Ray Bradbury and Serling.

Having been engrossed by The Twilight Zone as a kid, and enjoying it again as an adult, it was a real pleasure to read this informative look at the series. I recommend this book to all fans of The Twilight Zone and classic television. You can buy it here.

So I just had to pose a few questions to Martin Grams to share here. Here's my brief interview: 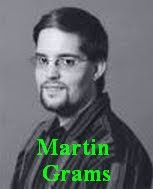 Why did this book need to be written?

I actually have a rule about not writing a book about a subject that has already been written about. There's been plenty of books written about THE TWILIGHT ZONE but after reading them I discovered there were errors that were being reprinted from one book to another. I realized that while cast and crew were interviewed (repeatedly over the years, I might add), with the exception of interviews, no one actually did any research, but instead they consulted previously published books and reprinted what was already in print. With a vast collection of sixty plus boxes of original Serling materials, I decided to break my rule and do a book that would clear up the mistakes and misunderstandings, set the record straight, and be the kick-butt book that TWILIGHT ZONE fans have been hoping for. Considering the response from fans, the book exceeded their expectations.
What is the first TZ episode you can remember? How did it affect you?

The first I saw was "Escape Clause," followed by "Perchance to Dream" but the third episode, 'Time Enough at Last," was the third and the one that captured me. I remember taking the video cassette to a friend's house and asking him to watch it and he too enjoyed the series. From that day on, I was hooked.
The original Twilight Zone flourished at a time (the late 1950s) of growing disenchantment with the status quo in America, and ended during the rise of the new--if brief-- optimism of the Kennedy years. How were American political and social currents reflected in Serling's Twilight Zone?

You're going to hate me but I won't comment. When I wrote the book, I decided to stick to the facts and leave opinions out, including social comments and the changing of the times. I felt (and still do) that opinions and interpretations are left up to the viewing audience. Only time I broke the rule is if I incorporated it into the plot [summary]. Example: In the plot of "Walking Distance, I always felt it was clever to have Martin Sloan's father give his son the wisdom he needs to accept the fact that he cannot go back to the good ol' days. His father has been dead for years but of all people, the wisdom comes from his father.
The Twilight Zone has been around in one form or another (three television incarnations, a comic book, a theatrical movie, a magazine and a radio series) for almost fifty years. Why has it been able to flourish in so many forms? 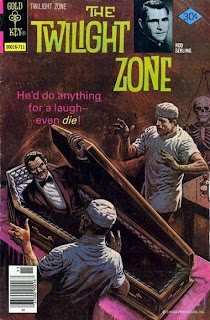 The fans. Without them, the series would not be as popular today. Reruns on TV contribute. Very few black and white programs air on TV and without the exposure, even the younger audience would not get into the series. And I do believe anything that exposes the younger crowd to The Twilight Zone will ensure the series' longevity. You have to remember that a large percentage of the fan base grew up with the series when it first aired and today, we're dealing with an aging fan base.
Describe something you discovered about the life of Rod Serling or the events behind the scenes on The Twilight Zone that surprised you.

I was truly surprised by the decisions Rod Serling made to ensure the series was high quality. "To Serve Man," "I Sing the Body Electric" and "The Mighty Casey" were filmed twice and then compiled from two separate filmings (at Serling's expense) to ensure they would not reflect a bad judgment in directing or filming. He also replied to his fan letters up to the third season where he discovered that replying to the letters was time consuming and then had his secretary reply to the letters with generic responses. But to take time to answer the letters personally was impressive when you compare the numerous things he was obligated to do as an Associate Producer. My favorite is the young lady on the East Coast who wanted to come out to California and be on the set to see how set design and art design was applied, as she was majoring in the subject and hoped to have a career in Hollywood. Serling responded personally in a letter with his personal phone number, telling her that he discussed this with his crew and when she arrives to call him so he can arrange for her to visit the set.
Could Serling thrive as a writer today?

Oh definitely. While we all might think it would be cool for Serling to have his own anthology again, the networks might not consider giving him carte blanche as it's extremely rare. But with the limits and restraints of network television more relaxed than years prior, I suspect he'd have the ultimate TV anthology today if he was still around.
__________________________


Martin Grams Jr. is an expert on classic radio and television, and is the author of the books Suspense: Twenty Years of Thrills and Chills, Inner Sanctum Mysteries: Behind the Creaking Door , and The Alfred Hitchcock Presents Companion, among others. My thanks to him for sharing his time with The Drunken Severed Head. 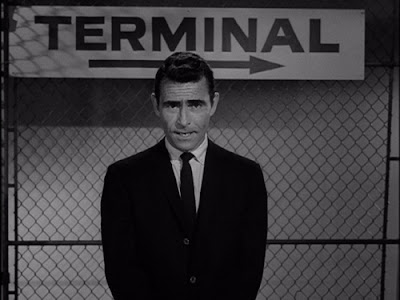 Above: Rod Serling with what appears to be a terminal case of "arrow through the head."
Relevant links: Other reviews of The Twilight Zone: Unlocking the Door to a Television Classic appear here and here.
Posted by Max the drunken severed head at 12:28:00 AM

A great review Max. You've made me actually want to buy the book. I love the old TZ and think this new book is exactly what was needed. Thanks.
r/e

I always liked to watch the opening of the later shows with the door and twirly things. Maybe one day I'll watch the rest of the episode.

I think to be on any type of "atus" Max means you don't post LoL, Although I expect nothing less from a drunk severed head lol

Glad to see you back. Hope the Hiatus has cleared up.

For all of us monster kids in our 50's The Twilight Zone and The Outer Limits had a profound influence on us. Thanx for turning us on to this book. I'll have to check into it.