3rd eye for the artist guy 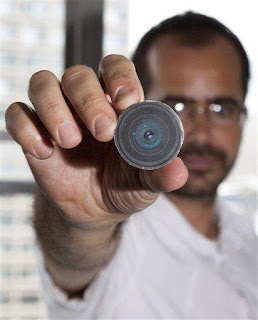 A bizarre, almost Frankensteinian art story appeared this week from the Associated Press. A New York University arts professor has had a video camera implanted in the back of his head as part of an art project titled "The Third I."

Here are several excerpts from the report, illustrated with a photo of Bilal (above, right) and images of third eyes from various sources:

"Wafaa Bilal, a visual artist widely recognized for his interactive and performance pieces, had a small digital camera implanted in the back of his head - all in the name of art.

"Bilal said Tuesday that he underwent the procedure for an art project that was commissioned by a new museum in Doha, Qatar, in the Arab Gulf.

"Bilal, who is teaching three courses this semester at NYU's Tisch School of the Arts, will wear the camera for one year. It is 2 inches in diameter and less than an inch thick.

"He said he chose to have it put in the back of the head as an allegorical statement about the things we don't see and leave behind. 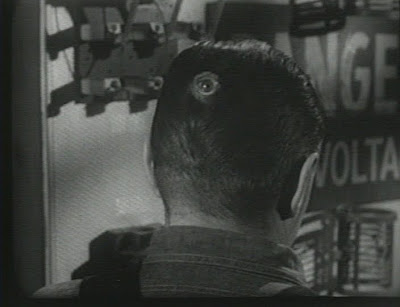 The back of Peter Lorre's head from the 1955 sci-fi TV movie "Young Couples Only."

"The camera will capture his everyday activities at one-minute intervals 24-hours a day and then be transmitted to monitors at the museum, said curators Sam Bardaouil and Till Fellrath of Art Reoriented, who commissioned Bilal on behalf of the museum. 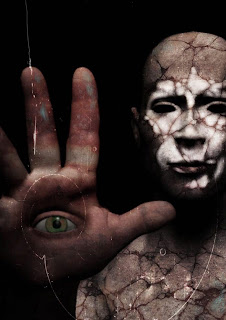 Art by Simon Jones. Image found here.
"Many of his previous works have invited debate and controversy.

"In a recent live performance piece titled "...and Counting," Bilal had his back tattooed with a borderless map of Iraq covered with one dot for each Iraqi and American casualty. Bilal, whose brother was killed by a missile at an Iraqi checkpoint in 2004, used the piece to highlight how the deaths of Iraqis are largely invisible to the American public. The dots for the Iraqis were represented by green UV ink only visible under black light, while Americans were represented by permanent ink." 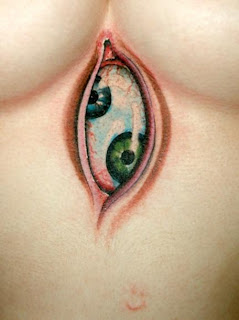 A tattoo by Fun Size Design found at the Creative Design Magazine website.
To read the entire article on Bilal and his implanted camera, go here. 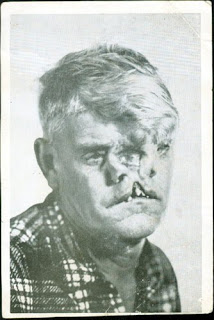 Sideshow souvenir card of Bill Durks; the middle "eye" is painted in. Image found here.
More news of the melding of a camera with the human head came to my attention at the same time, in a bit of very striking synchronicity. Last month, the website of art/fashion blogger Scott Best posted photos of a working pinhole camera, created by artist/photographer Wayne Martin Belger, that is made from a human skull: 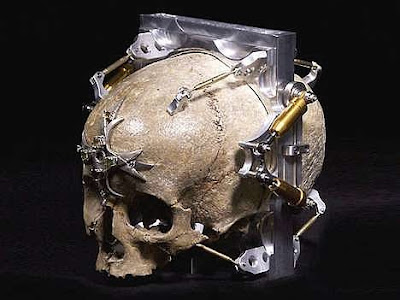 To see more about this eerie-but-fascinating "must have"art piece for the seriously strange shutterbug, go here. 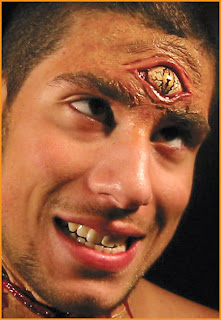 This prosthetic 3rd eye can be purchased here.
Posted by Max the drunken severed head at 1:58:00 AM

I can't go on reading this, way funny.