But I'm going to ask you to vote today!

Do you read Pierre Fournier's FRANKENSTEINIA blog? If not, you should. It covers all things related to Frankenstein in pop culture, literature, film and history around the globe. It's popular and penetrating, enthusiastic but not shallow, smart but not cerebral. It's a fantastic trip for all lovers of Western-style horror narratives and imagery.

It's nominated for a Rondo Hatton Classic Horror Award again this year, and I'm asking YOU to vote for it! It has not won yet, but did come in second last year, surprising many--including me!

I'm passionate in my belief that Pierre Fournier deserves it-- and every vote counts because the winner may win with only a plurality of the vote. That's why I'm endorsing it. 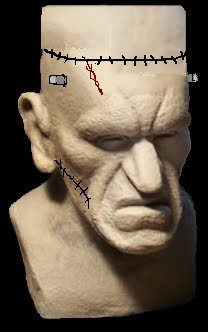 Also endorsing FRANKENSTEINIA is Tim Lucas of VIDEO WATCHBLOG (via Facebook) Stacie Ponder of FINAL GIRL,. and Greg of CINEMA STYLES. They are all nominated, as is this blog, and all 3 are excellent reads. (Mine...meh.) Tim's blog won two years ago, I won last year, and Stacie's has yet to win, though it too deserves a Rondo--and I'm sure it will win one of its own in the near future. But this year, we're all voting for Pierre's superb work at FRANKENSTEINIA. (To the right you can see a "custom" Rondo award suitable for Pierre at the Rondo Awards ceremony in May, which is held at the Wonderfest convention in Louisville, KY.)

I'd like to share some of the best of FRANKENSTEINIA . Here's a dozen instances of the best of the blog, with links. (Click here for the Rondo ballot itself.)

1. One of the very best from 2010 was THE BRIDES OF FRANKENSTEIN, about the actresses considered for The Bride. Every one of 'em well researched, including Arletta Duncan, who appears as a Bridesmaid in FRANKENSTEIN, and illustrated with photos. The layout, with all the women shown in profile, was especially nice.

2. THE CEMETERY SKELETON. Pierre's paean to a memorable movie prop.
3. AFTER FRANKENSTEIN, which traced the careers of the principals from Edison’s Frankenstein in its centennial year.
4. SHE IS REAL! SHE IS ALIVE! FRANKENSTEIN OF THE FAIRGROUND. A post inspired by pics of freak show tents from British fairgrounds.
5. SCRAPBOOK FRANKENSTEIN. The cartoonist from a newspaper page saved by Jack Pierce gets tracked down and discovered to be involved in getting Boris and Bela to sing together on a radio show.
6. THE FUNERAL OF SHELLEY: THE ART AND THE REALITY. Pierre analyzes a famous painting.
7. MY TRIFLING EXPERIMENTS. Tracked the actors who played the homunculi in BRIDE.
8. THE AUSTRALIAN FRANKENSTEIN, about some BRIDE ballyhoo from down under.
9. THE BRIDE OF THE BRONX, about an unusual playbill.
10. FRANKENSTEIN IN PARIS, about a French postcard from 1908 which shows a theater advertising a Frankenstein stage play!
11. THRILLS AND CHILLS! THE SUPER-SHOCKER REVEALED. One of several posts about BRIDE ballyhoo and contemporary reviews of the film.
12. THE FIRST FRANKENSTEIN OF THE MOVIES, celebrating the 100th Anniversary of the Edison film.

Finally, I think Pierre made a real discovery, spotting an unidentified (and perhaps unidentifiable) flying object in the 1931 FRANKENSTEIN, in his post A FRANKENSTEIN MYSTERY. A lot of fun.

Also, io9, the Gawker Media site about science fiction and fantasy, was impressed enough to re-post his piece FAIRGROUND FRANKENSTEIN, and THE FIRST FRANKENSTEIN OF THE MOVIES, celebrating the 100th Anniversary of the Edison film.

Pierre also created some pretty special "special" posts. At the end of his year-long celebration of BOF's 75th Anniversary, FRANKENSTEINIA ran a special ART OF THE BRIDE series, posting art every day from December 16 to the 31st. It turned into an event of sorts, and was covered by popular and respected sites like Neatorama, Nerdcore and io9.
Another notable "special event" was the FRANKENSTEIN BOOK MONTH in October, reviewing Frankenstein-related books and showcasing book designs and illustration.
Well, if you've checked out the links and then read this far, you are no doubtby now a FRANKENSTEINIA fan par excellence. (In Pierre's honor, I have to throw in some French somewhere!) So vote for it, s'il vous plaît?

A truly excellent site, in every way.

I'm sorry to have to be so insistent, kids, but now that you've done your Rondo-voting, duty, you may play outside an extra half hour.