Life sometimes imitates the cinematic arts, and recently I came across two examples.

In a scenario straight outta The Manchurian Candidate, Robert Kennedy's assassin Sirhan Sirhan is now claiming to have been hypnotized into killing the famous former senator and attorney general. Sirhan (who was NOT ever, but should have been, a resident of Walla Walla) is currently up for parole, though he's unlikely to get it.

You can hear a report of this claim on National Public Radio's audio archive; the news was reported on their program All Things Considered. A bonus bit of yuks is hearing host Michele Norris clearly say "hyp-ma-tized" for "hypnotized." (Not surprising-- but mildly dismaying--is the fact that NPR's transcript of the program corrects Norris' mispronunciation.) 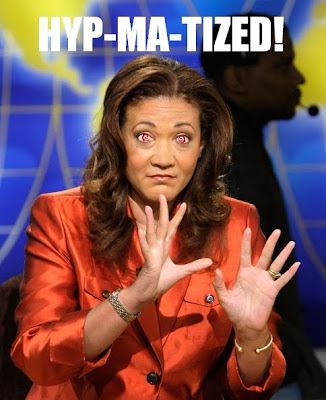 Michele Norris, in a trance, is made to do "jazz hands."
Behind her, a man chews on the wrong end of a lollipop.
Original image by Alex Wong/ Getty Images here.
A second recent instance of life aping the movies--specifically, adaptations of the story The Strange Case of Dr. Jekyll and Mr. Hyde, was found in a press release by the Multnomah County Sheriff's Office in Oregon. As a follow up to their educational 2005 media project Faces of Meth, the office has released From Drugs to Mugs, a series of mug shots that show how hard drugs like meth, heroin and cocaine can radically changes the looks of those addicted to the illicit substances. Here, purely for educational purposes of course, are some of the most shocking of those transformations: 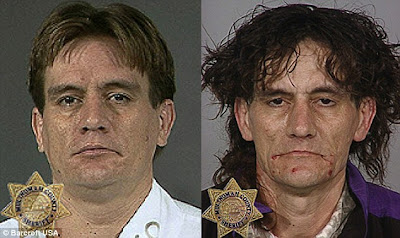 Warning: Use of hard drugs can turn you into Keith Richards.

Here's a sad Jekyll and Hyde image from the 2005 Faces of Meth: 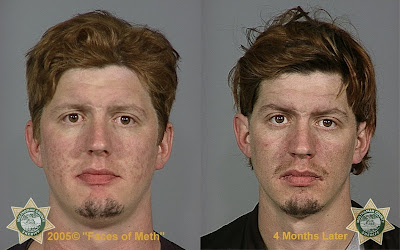 Back to From Drugs to Mugs-- and life imitating the movie Dr. Jekyll and Sister Hyde (except for the gender change part): 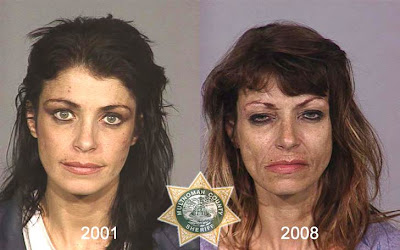 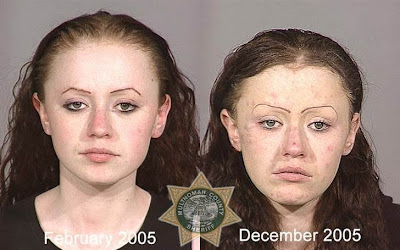 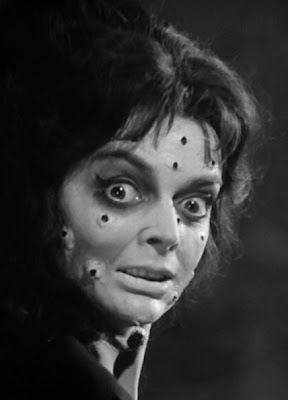 And here's her contemporary, real-life counterpart: 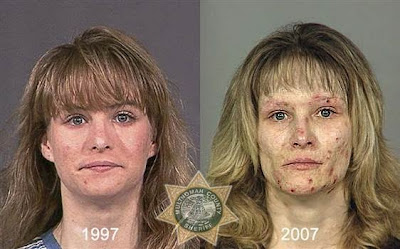 Read more as reported by the Daily Mail in England. (Yep-- a news story from the U.S. getting better-written, more detailed coverage overseas than here. Sigh.)

Eeeek. Black Sunday. Scare me. I can see a real life "Faces of Meth" every visit I make to our local grocery. Looks like the eye brow artist lost some of her prowess.

I think that last picture is going to keep me awake tonight. That is just unsettling.

I live in the area and I didn't even know about these photos....I think that might be a good thing :D

Those pictures show true horror. Right now I'm not sure what is the most horrible. Methinks its a tie between these mugs to drugs photos and watching Charlie Sheen babble incoherently on the news reports and seeing his grinning "friends" stand behind him and not stepping in to help.

I can't take my eyes off either, though!

But people who celebrate their real-life weirdness (whether it be their appearance or tastes) can be life-affirming and wonderful, even if some people jeer it. (I've wondered that if I'd been born 15 years later if I might have gone for a punk or goth appearance in my young adulthood.)

The people who harbor real monsters inside pass as normal: Joan Crawford, Leona Helmsley, Bernie Madoff, Ted Bundy (in ascending order of cruelty and monstrosity.) Of course, that way they escape judgment until caught.

Of course most people who look "normal" ARE. But as I always say, "Everyone is somebody else's 'weirdo'."