My previous post on a crass, goofy and revolting douche commercial got me to thinking about women and how we obsess over their parts instead their..uh, whole. (Perhaps I should say "entirety.")

That reminded me of me of a cartoon I found in a 1955 book, "Furthermore Over Sexteen." (Yes, they really do underline the "sex" part in case you can't spot it as a syllable in a larger word.) It's a collection of cartoons and jokes from a "men's humor" magazine of the time. 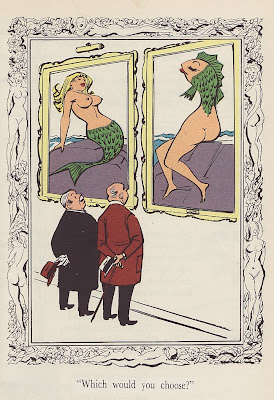 I like this cartoon and its playfulness in imagining variations in mermaids. Also, I see its open and honest, un-sublimated mild sexism as less annoying or harmful than the patronizing but seemingly "pro-woman" sexism of that Summer Breeze commercial. The social mobility of women is better now than then, thankfully, but a certain innocence in portraying gender relations is gone.

Besides this book of cartoons, I also happened to recently purchase a figure from The Nightmare Before Christmas from a dollar store. It's a female creature inspired by the classic film Creature From the Black Lagoon. 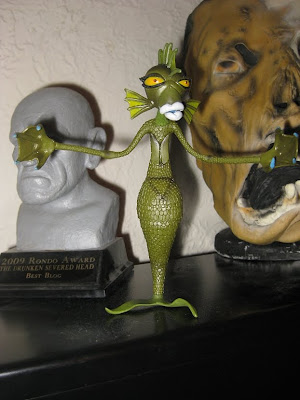 Ain't she a beaut? No tossing her back--she's a keeper!
Posted by Max the drunken severed head at 4:39:00 PM

which end would I want??