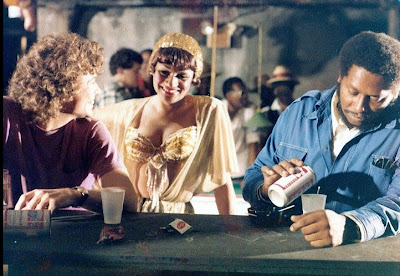 In the middle of photo above is actress Beverly Bonner playing the prostitute "Casey" in Frank Henenlotter's cult fave, Basket Case; Ms. Bonner's appeared in nearly all of Henenlotter's films. Recently, she was in Pittsburgh at the Hollywood Theater screening of Basket Case to premiere a new one-act play she's written called Casey: 30 Years Later. The event was sponsored by the imaginative and fun staff of Pittsburgh's Horror Realm convention.

The premise is that Casey, even brassier and sassier than in her youth, now runs a call girl service for elderly hookers, and is visited by a young journalist who wants to interview her about the people--including the monstrous Belial--seen in the cult movie. (Belial, as it turns out, didn't die.) The show blurred the line between the world of the fictional Basket Case and the world of fans of the film, winkingly raising the idea that the movie was a documentary!

Like the Henenlotter universe it sprang from, Casey: 30 Years Later was crass and tasteless.

And like Frank's films, it was also very funny! I laughed so hard at one point the row in front of me jumped--but they were laughing, too. I thought this was a smart event--more than a personal appearance of an actor at a film showing, this extended the movie's story. Henenlotter gave Ms. Bonner his blessing for the show because he enjoys her comedic talent. It was amply on display here, as she added bits of spur-of-the-moment improv that made the sketch funnier, such as when her costume threatened to malfunction during a cross! I also noticed that Ms. Bonner had written in a few of her better jokes from her stand-up act. (As a guy who supports recycling, I like it when material is saved from a data dump! I do it here all the time!)

Some lines were funny because they were sudden and surprising, and played almost like non-sequiturs. A sample, referring to Belial: "He's ugly as hell, but he knows how to handle a breast."
Sadly, equipment  failure ended the movie halfway through the screening, but because Ms. Bonner's act followed the film, "Casey" saved the day!

Prior to the screening was an appearance by talented comic artist and writer, Joshua Emerick. Basket Case has been turned into a comic strip published monthly in the venerable horror mag, Fangoria, and Emerick is the man behind the art and text new feature. He spoke about his love of the film, how Henenlotter was at first afraid to consider the idea (Frank's now enthusiastically involved, suggesting ideas) and how his three year old daughter loves watching the original Basket Case with him. (!)

With Emerick was the comic's colorist, Eric Kochanski.
The host of the evening was Horror Realm's Barnabus Bailey. Below is Barnabus with actor and film blogger Michael Varrati. In his online film appreciation column, Varrati nails Henenlotter as being like a "12 year-old boy [who] finds the most disgusting things endlessly amusing." (Well, I never grew up either.) 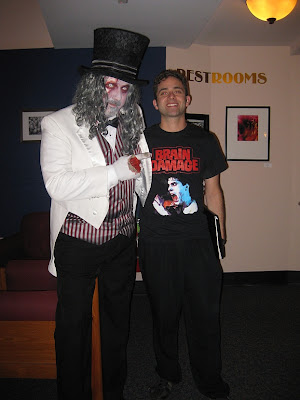 Also in attendance was genre film reviewer and historian Tim Gross, who has long championed Basket Case as under-appreciated. I think cult horror fans agree!
The folks of Horror Realm asked me to interview Bev Bonner and Michael Varrati after the play, and it was a delight and a privilege.Ms. Bonner and Michael Varrati each talked about working with one of John Waters' recurring performers--Divine and Mink Stole, respectively--and reported that neither was anything like the loud, impulsive, vulgar screen characters they played. Ms. Bonner and Michael Varrati similarly agreed that for themselves as performers, outre material was more involving than any classic dramatic fare they've done.

Ms. Bonner, who studied at the National Academy of Dramatic Arts, said it had not prepared her for the phoniness and blandness of the Hollywood entertainment industry, and she far preferred to stay in New York.
A lighted birthday cake was brought out at the end for Ms. Bonner to make a wish on. Ms. Bonner says she wants to present Casey: 30 Years Later at horror cons around the country, and I hope she gets that wish!

What a great post - I wish I could have seen this - it sounds absolutely brilliant!

This is really cool. I love BASKET CASE and this would be such a treat. I hope she does get to perform this in other venues. Very cool, indeed.