Monster Bash, the pants of Bela Lugosi, Rondo for Robles, and more!

The annual Monster Bash festival held in the Pittsburgh PA region just came and went, and of course the Voodoo Queen and I were there. (It's where we announced our engagement in 2005!) Jane took the previously posted pic of Brian Horrorwitz at the Bash, and this week I'll be sharing more on the fun to had there, including a photo of the disembodied but eternally new-looking pants of the late great Bela Lugosi. (I saw them! I touched them! They cured my fear of bats!)

But first, I want to share some photos of an award ceremony I was pleased to be asked to be monster of ceremonies for. One of the Rondo Hall Of Fame awards for 2006 was bestowed upon Mexican horror icon German Robles (EL VAMPIRO, EL ATAUD DEL VAMPIRO, and many others). Sr. Robles was unable to attend the main Rondo award ceremony at Wonderfest in May, but was attending the Bash, and I was asked to present the award to him, and the event would be hosted by the Lugosiphilia Society. Mexican horror expert Bobb Cotter (author of THE MEXICAN MASKED WRESTLER AND MONSTER FILMOGRAPHY) was attending the Bash as well, so I decided it best to ask him to handle the bulk of the tribute remarks to Mr. Cotter, and to give the actual handing over of the award to Sr. Robles' long-time friend and Bash guest, Richard Sheffield. I'm glad I did-- it produced excellent results. Author Tom Weaver called the ceremony "a nice little presentation...just the right length, and some humor", and added "just right, a little bit mushy."

Of course, I went formal for the occasion: I wore my prosthetic body. Here I am with Sr. Robles: 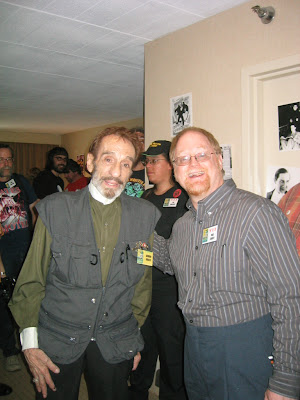 Photos of the ceremony taken by Jane can be found at this cool blog, Vampiros and Monstruos.
Take a jaunt over there and see some nice moments captured for posterity.

To close with a really FUN foto, here's me meeting Elvira, (grrrrRRRRRrrrrr!!!) also a guest at this year's Monster Bash: 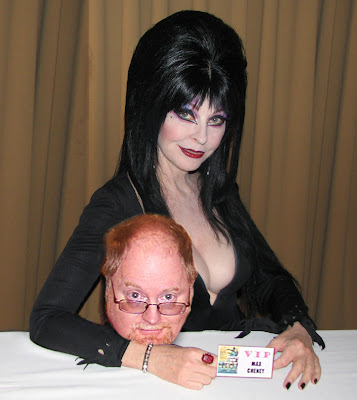 Is it just me or does anyone else see the resemblance of Robles to Don Quixote? Bet if you searched his luggage you'd have found the Golden Helmet of Mambrino(with such an illustrious past)and a photo of his horse Rosenante. No Sancho--they've been estranged for years.

Oh, wow. There are too many possible dirty remarks to make here. I'm dizzy from trying to pick one.
IL