This year's celebration of ghoulden age Hollywood horror was quite memorable, in ways both harrowing and happy. The week running up to the Bash was a marathon of sleep deprivation for Jane and I as we got closer to the goal of making the apartment the attractive, Halloweenish haven we had always wanted it to be. We got pictures framed and hung, blinds and curtains hung, and arranged furniture that had never be anywhere but in the way. And oh, the cooking! I would buy all the groceries, we found recipes jointly, and Jane fixed most of them. (This in preparation for a dinner we gave at our hotel suite on the first official night of the Bash.)

Wednesday was the last day of work in the retail department I HAD been in; I was then to take a week's vacation for the Bash and transfer to a new department. The fact that I was escaping a boss I considered to be monstrous and beastly I took as a good omen for the thrills to be had at the Bash.

Thursday, the day before the Bash kicked off, I drove to the hotel to meet early arriving friends and to buy a Dracula ring from Richard Sheffield, a zoo curator in Mexico who is a part-time professional "friend of the late Bela Lugosi". (No disrespect is meant here; Mr. Sheffield was a very kind friend to Lugosi in the horror star's last years, and he's very generously shared his memories, photos, and mementos in articles, books, and at conventions, just as I hope I would do if I had been the pal of a passed-on star! Sheffield has done a service to horror film history by sharing as much as he has.) Anyway, I arrived at the hotel before Mr. Sheffield, and found friends Robert Taylor and Sara Waugh there. This was fortunate, as they are both fun people and major collectors of horror film-related memorabilia; they could appreciate my wanting the Dracula ring, a replica molded from a prop ring made by Universal for four films with Dracula in them. (Robert, seeing the ring I bought I bought from Sheffield, decided he had to have one too!) Here I am with Robert: 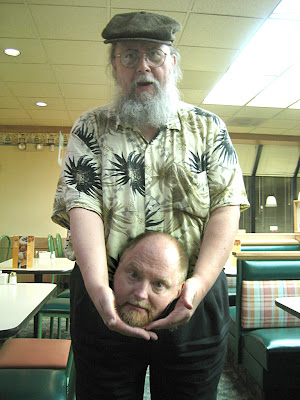 The pose was probably a bad idea, seeing as it calls to mind Fred Schneider's song Monster ("I've got a monster in my pants..."). The picture is pretty fly, but I am not popping outta Mr. Taylor's fly, you understand! Here's the ring, molded from one first used in Son Of Dracula, and worn by Lon Chaney, Jr., John Carradine and finally by Bela Lugosi in Abbot And Costello Meet Frankenstein. Richard Sheffield was eventually given the ring by Lugosi. (My cheap digital camera doesn't take good close-ups, so the pic is one I found on the Internet of another one just like it.) 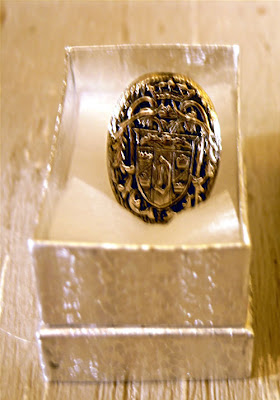 I also got to see Brian Horrorwitz from the Trash Palace site: 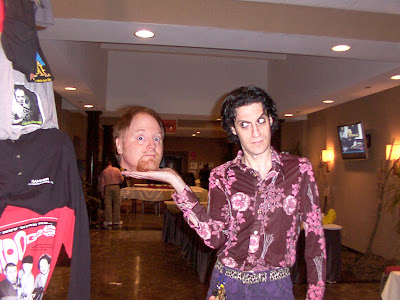 Dammit, no one seems able to balance me on their hands very well, and just after the shutter opened here I fell over backwards onto the floor. Thank god I'd been drinking heavily and felt the impact less!

Part 2 tomorrow or Wednesday.
Posted by Max the drunken severed head at 1:39:00 PM