Well, sort of! A MySpace poster named Porfle (I like to think of the name as a contraction of "pork waffle") has posted a rant against the "Aunt Bee" character on the classic TV program The Andy Griffith Show. Porfle's post begins with these memorable lines: "Ever want to blow Aunt Bee's head off with a shotgun? Me, too. " He then goes on to describe an episode that Rob Zombie or Quentin Tarantino might dream up for the show. It's hilarious-- read it here.

Coincidentally, The Drunken Severed Head, when he was a kid, had a relative called Aunt Bee, as well as an Uncle Monk and a great-grandmother called "Cooney". Colorful names ran in my family.

At the Classic Horror Film Board, Porfle, a/k/a Blackbiped, posts this funny foto: 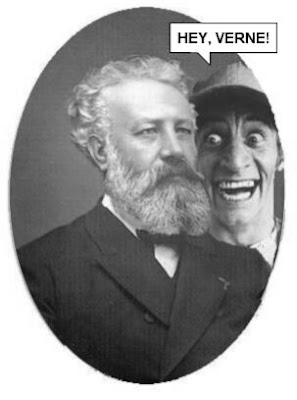 Porfle's MySpace journal has been added to the links section here. He earned it.
Posted by Max the drunken severed head at 12:37:00 PM