THE WEEKLY WORLD NEWS is not dead!

Its spirit has taken possession of other news outlets! F'rinstance, Yahoo carries an Associated Press story about the discovery of a chupacabra (a legendary, spiny creature that sucks the blood of livestock). Seems as factual as an item in the now-defunct WWN, but here's the report:

Has a mythical beast turned up in Texas?

CUERO, Texas - Phylis Canion lived in Africa for four years. She's been a hunter all her life and has the mounted heads of a zebra and other exotic animals in her house to prove it. But the roadkill she found last month outside her ranch was a new one even for her, worth putting in a freezer hidden from curious onlookers: Canion believes she may have the head of the mythical, bloodsucking chupacabra. "It is one ugly creature," Canion said, holding the head of the mammal, which has big ears, large fanged teeth and grayish-blue, mostly hairless skin.

Canion and some of her neighbors discovered the 40-pound bodies of three of the animals over four days in July outside her ranch in Cuero, 80 miles southeast of San Antonio. Canion said she saved the head of the one she found so she can get to get to the bottom of its ancestry through DNA testing and then mount it for posterity.

She suspects, as have many rural denizens over the years, that a chupacabra may have killed as many as 26 of her chickens in the past couple of years.

"I've seen a lot of nasty stuff. I've never seen anything like this," she said.

What tipped Canion to the possibility that this was no ugly coyote, but perhaps the vampire-like beast, is that the chickens weren't eaten or carried off — all the blood was drained from them, she said.

Chupacabra means "goat sucker" in Spanish, and it is said to have originated in Latin America, specifically Puerto Rico and Mexico.

Canion thinks recent heavy rains ran them right out of their dens.

"I think it could have wolf in it," Canion said. "It has to be a cross between two or three different things."

She said the finding has captured the imagination of locals, just like purported sightings of Bigfoot or the Loch Ness Monster have elsewhere.

But what folks are calling a chupacabra is probably just a strange breed of dog, said veterinarian Travis Schaar of the Main Street Animal Hospital in nearby Victoria.

"I'm not going to tell you that's not a chupacabra. I just think in my opinion a chupacabra is a dog," said Schaar, who has seen Canion's find.

The "chupacabras" could have all been part of a mutated litter of dogs, or they may be a new kind of mutt, he said.

As for the bloodsucking, Schaar said that this particular canine may simply have a preference for blood, letting its prey bleed out and licking it up.

The pictures they ran with it are ho-hum; clearly this is a dog: 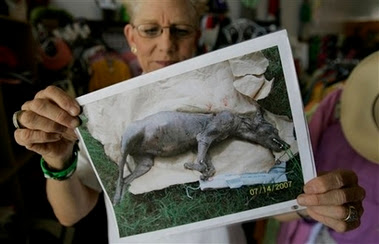 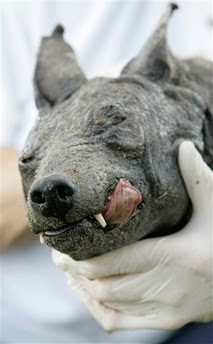 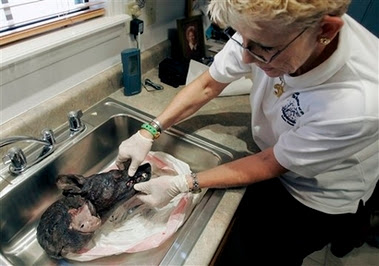 Here's a picture of another dog (found dead in Maine last year) that was being touted as some unknown monstrosity (one message board called it a chupracabra): 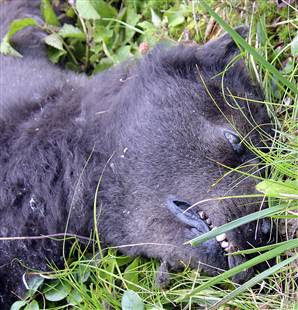 You can read more about this beast here. At least most descriptions of the carcass describe it as a dog-wolf hybrid, or seem to think it's a deformed dog. Doesn't seem too monstrous to me-- it seems to have been a "Hound Of The Baskervilles" scenario where fear and rumor make something slightly-out-of-the-ordinary into something seemingly supernatural.

But that's an inescapable part of being human. No amount of mundane reality or sum of prosaic facts will ever make us creatures without a need of shadows, angels and phantasms. And thank Cthulhu!