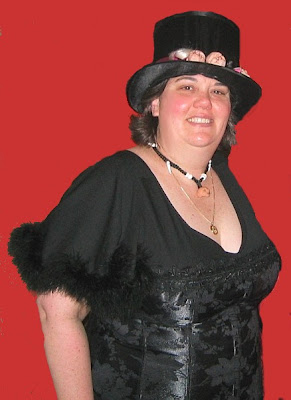 As this blog nears its first birthday later this month, I'm trying to catch up and post things that either were delayed or I put off posting. Recently, my bitter half Jane (I mean buttered half!) completed a review of a convention in Warren, Ohio she attended last November called Dark Xmas . It was apparently not so well attended this year (even Conrad Brooks of PLAN 9 FROM OUTER SPACE infamy didn't show, and that says something), but my wife wound up so charmed by guest Tony Todd (CANDYMAN, FINAL DESTINATION, NIGHT OF THE LIVING DEAD remake), that she had a good time.

(With apologies to Jimi Hendrix)

I’ve contemplated making this entry for a while. A couple of months in fact.

There was plenty of buzz both before and after this con. I wanted to wait until the dust settled before making my observations. I’ve read the blog of the event organizer, and he seems to have handled the situations that arose very well. That said, onward.

I was looking forward to this con for several reasons. It was close enough to Pittsburgh to be a nice road trip - which I love. It was in an historic hotel in a small town - also a plus in my book. The area turned out to be really interesting, the mapquest directions sent me in the opposite direction once I got off of the main road. So I got to see a bit more of Warren, Ohio than I had originally planned.

The hotel was on the old town square, I found a parking space close by. Right next to the hotel there was a radio station. The DJ and control room/board were right there inside a big picture window on the street. The music was being pumped outside. It was all very “American Graffiti” and very cool. I can’t say I’ve ever been in or seen a station like that except in old movies.

I was also looking forward to the guests. The guest list ended up slowly unfolding to be different than expected. More on that later.

I’ve never met Tony Todd at any of the various and several conventions I’ve attended. I love the Candyman character. He brought to life a great conflicted, darkly tragic protagonist. I like pathos in my stories, and Mr. Todd brought that in abundance. Plus, I love his voice. Hearing it in person was going to be a real treat. I could listen to him read the phone book, which is what I ended up writing in his guest book.

On arriving at the hotel, I enter in anticipation of the fun, (I know, I’m a geek, but I am one with my geekiness, OOOOHHHHMMMM...) The immediate impression as I walked in was...

I looked past the registration desk and saw what looked like a very small dealer room. After getting my admission, I entered. Yup – really small. I made one circuit, as is my habit, just checking it out. Tony Todd, check. (“Yaay!” said the fan girl!) But no Kelli Maroney. Hmmm.. As I exit I see another small room across the hall. Maybe she is in there, I say to myself. I entered and scanned the room.

Nope. I didn’t find out until later what had happened. A friend of a friend told me that she had an event that came up with her children. That’s cool, and very understandable. (Previously announced guest Brinke Stevens also backed out, earlier.)

I did see a friend, Mr. Gravely MacCabre, at his table for Castle Blood. We talked for while, then I decided that based on my observations, I had some time to kill before I made the drive home.

I settled on honoring a great convention tradition, and hit the bar. I’d purchased a book on Voodoo, and one on voodoo queen Marie Laveau in the second dealer room, and thought I’d peruse them while I had a cocktail.

This is where it got really interesting.

There was only one bartender, and the bar was crowded. At one end of the bar sat almost all of the members of a local police pipe and drum corp, and she was busy just keeping up with them.

I finally got to order and it went like this:

Blank look on the part of the barkeep. Puzzled look. “What’s that?”

Shrug from the barkeep, then her eyes lit up. “We have gin,” she said hopefully”

“And dry vermouth,” says I.

“Okay, how about a gin and tonic?”

Struggling to not bang my head on the bar, I say “Never mind the gin, I’ll have a Bourbon and Coke.”

I start channeling my inner Basil Fawlty and squeak, “Forget it! Just get me a beer!”

I won’t even get into the fact that I had two choices there. Bud and Bud. Heh.

So, I had my beer, scanned my books, and decide to take my bit of liquid courage upstairs and talk to Mr. Todd.

He turned out to be incredibly nice. What is it about actors that play not nice guys being directly proportionate to the opposite in real life?

I first chose a photograph-- Candyman of course-- and said I’d had a beer, so now I little less nervous about talking to him. This produced a smile, and I mentioned that I had recently viewed his version of “Night of the Living Dead”. “What did you think?” was his immediate response. I liked it, I like the twist at the end. I mentioned that I live in Pittsburgh, and that I see Tom Savini at the grocery store sometimes. Mr. Todd laughed, and said he couldn’t imagine the Tom Savini at the grocery store. I admit I agree, picturing the stoic and somewhat intimidating tough guy shopping is a bit of a stretch, but true nevertheless. 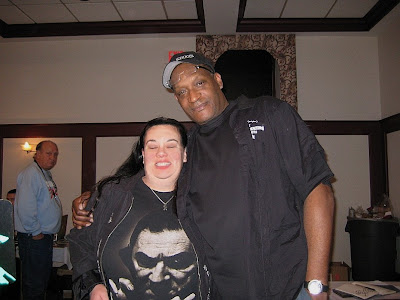 I then signed the guest book, and we made small talk about the con. After that, I launched into my conversation at the bar downstairs, I had to vent, and something told me I would get some commiseration here. I did.--WE both laughed pretty hard at that. Mr. Todd told me that he had tended bar for 5 years, and that would have never happened on his watch!.

I then asked for a photo op, and was obliged. When Mr. Todd walked around the table, my nervousness had to go and state the obvious...”WOW! You are tall!” Which is true, at 5'4" the top of my head hits him about chest level. I got another attendee to snap a photo, and I hear Mr. Todd’s deep voice rolling out somewhere above my head. (“Cool!” said the fan girl).

After that, I took my leave, hit a booth that had some kitty toys (for my fur-faced dependents), and went back to give Mr. Todd the blog address where I planned to post this here review. He was genuinely appreciative, which is refreshing in someone who has his celebrity status.

All in all, I had a great time, snapped some cool pictures that I didn’t expect, (The police band, the radio station) and had an uneventful and pleasant drive back to Pittsburgh. Although I was surprised by how poorly attended it seemed to be by both guests and convention-goers, Tony Todd's charisma made the trip worthwhile.
Posted by Max the drunken severed head at 1:29:00 AM

I am truly disturbed! Grateful that you brought your lovely wife, Jane into your blog here to give it a bit of class, but disturbed by that tru;y horrifying story of her bar experience. It gave me the chills. It's enough to make me cry in my beer.