This blog is ONE YEAR OLD!!

Yes, it doesn't seem possible, but this blog is ONE YEAR OLD TODAY!!! (Who knew that Blogger would allow this mess to continue so long?!!) Old enough to be moldy!

Of course my dear wife Jane (the Voodoo Queen) and I celebrated the occasion in high style. We went out to a local Polynesian bar and grill called The Stinky Tiki. The waitress below brought us a very large flaming cocktail called a Mystery. (I think it's called that because after you have one, you're clueless.) 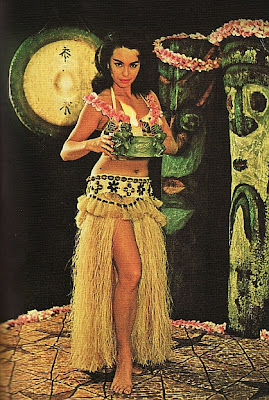 Once we awoke and went back home, Jane and I kept toasting the occasion: 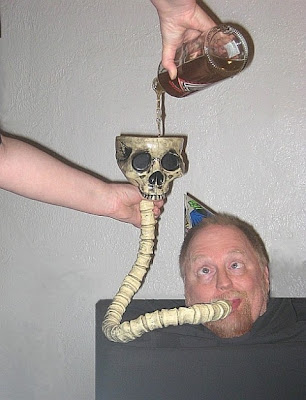 But, knowing I had a post to make, I limited my drinks to a reasonable number-- any number below pi squared. (Too much drinking and I become an irrational number.)

In its first year, the blog is nominated for the prestigious Rondo Award! That is an honor I did not expect. I certainly don't expect to win, but I do hope to get more votes than Ralph Nader does in the November general election! (That shouldn't be too hard.)

To be reeeeeally honest, I'm happy and psyched to be nominated, but if I got enough votes to make "honorable mention" (which is, like, fourth place), I'd be sublimely ecstatic! (Hey, I gotta have enough votes to place, so I can drink at least 4 toasts after the announcement of the winners.)

Vote here by midnight March 8. Or write David Colton and change your vote. (You can until the deadline, hee hee!) And while you're at it, consider writing in Terry Ingram for "Monster Kid of the Year" and Ben Chapman for Monster Kid Hall of Fame.

I'm also happy to know that people like to goof off at work by visiting my blog. I've had hits from the offices of several blue-chip companies: businesses like Dow Chemical, General Electric, Federal Express, and others. Government workers, too-- many hits have come from various municipal and state governments (a shout out to whoever works in the state government of Nebraska who regularly checks this blog), as well as NASA, and the Office of the Securities and Exchange Commission! The Ivy League schools, too, have people dumb enough to read my junk: I've had several hits from both Harvard and Princeton.

Also impressive (to me, anyway) is the fact that the reading level of this blog went from junior high level to high school level, according to The Blog Readability Test. (It's a website where you plug in a URL and the site you submit is analyzed for the reading level necessary to comprehend the average post.) Incredibly-- I've caught up with the intelligent and famous site Video Watchdog (www.videowatchdog.com)! (Gotta question TBRT's reliability if they put me on the same level as VW! Must be a fluke.) Especially as everyone knows my humor is, at best, junior high level-- and I'm proud of it!

Was very surprised that Tim Lucas' Rondo-nominated Video Watchblog wasn't rated at least at college level. But my friend Pierre over at Frankensteinia should be happy-- his site's gone from "College Post Graduate" to "Genius" level, according to TRBT. Congrats, Pierre! (Me like your blog! It goood!) Both Frankensteinia and Video Watchblog are nominated for Best Website or Blog, and I won't be surprised if either win; both are excellent.

Hey, even if me no write good, people come for the visuals. I've gotten hits by the hundreds (maybe higher-- this first year has seen over 13,000 hits) for the topless picture of model and Cindy Pucci that was featured in this post:

The second most frequently seen post at this blog is this one showcasing the pictures of artist Linda Miller:

Both posts feature impressive women! (I like my readers taste.) Perhaps I should get Linda to paint a 3-D Cindy Pucci portrait and REALLY drive up my hits! 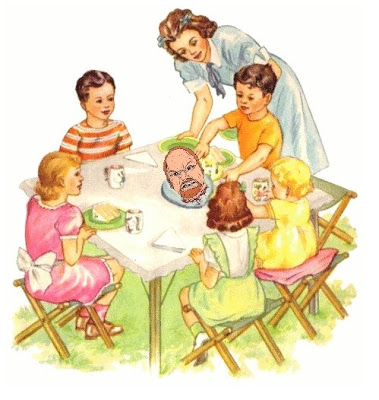 Congratulations Max. I hope your blog continues for many more years.

Max: In the words of Major Renault "I'm shocked! Shocked! Shocked! to find that so many people have looked at your blog(and I mean that in a nice way).
Thank you for posting some of my work, now if all those window shoppers out there would just pry open their wallets I could go from leading a life of quiet desperation to perhaps a just a quiet life.
"Meek"

Congratulations, Max, on one year of successfully evading authorities, and thank you for spreading silliness in the world! Your getting hits from NASA explains the Shuttle tile problem and why they overshot Mars with that Orbiter.

Thanks for the kind words and the support you’ve given me from day one when I started my own blog. I am grateful for your friendship, speaking of which, I am especially grateful that you’re in Pittsburgh and I’m way over here in Montreal, and let’s keep it that way.

If there was an award for friendliest place on the Net… er, well, I guess SOMEONE would win it, but I’m reasonably sure that I’d vote for The Drunken Severed Head!