Thanks to these fiends

When I wrote yesterday's post, I was rather sleepy from all the celebrating I'd been doing, and stupidly forgot to say thanks to all the people who have assisted me with this blog, or contributed to it, or were especially encouraging. I am very grateful to this passel of positive people:

Everyone of them is a beautiful person inside (some even outside!) and I blow air kisses to all of them.

You're probably thinking, Is that all they're gonna get, you cheap bastard? No, no. I have something much more substantial to bestow on my benefactors. Every one them gets this: 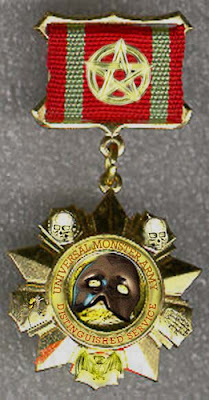 It's "The Macabre Masque of Distinguished Service", a medal previously used to honor member service to the internet forum Universal Monster Army. Being a moderator there, I've got a ton of 'em layin' around-- I might as well use 'em. So in addition to my thanks and this medal, all the people above who aren't already in the UMA become honorary members! Congratulations!

These medals not only will look great on a lapel or pinned to one's face (that's how I like to wear mine when I pretend I've done something good for the UMA), they're also an inexpensive high! Being made in China from cheap plastic, the fumes are overpowering and cause mild euphoria and weak hallucinations. What fun!

Post script: Oops! I forgot that the FTC sent me a letter ordering me not to distribute these medals. Sorry about that! Well, enjoy the photo of the thing, my friends!
Posted by Max the drunken severed head at 1:56:00 AM

Labels: friends, gratitude on the cheap

Max, I've been meaning to send my condolences, make that, congratulations on the first anniversary of your wonderful blog, but I've been battling deadlines and the flu.

Now to see my name listed amongst such distinguished company and to find that I've earned a medal gladdens the heart I shall, apparently, never get to pin this medal above.

Max, I celebrate each day that your blog enters my life, and look forward to all the pleasures and attrocities you post on it throughout the second year. I reserve my right to change my mind concerning the third year depending on what I see hear during the course of the next 365 days.

I now offer up a freshly opened bottle of wine and rather than fill your glass, pour the entire bottle down my own throat so that i can feel closer to you by entering an innebriated state myself.

The swell words give me a swelled head! You couldn't have wasted them on a nicer guy!...Or something like that!

Salut back at ya!