The Voodoo Queen and I, and a friend, went last month to see the controversial touring exhibit, BODIES: THE EXHIBITION. This is an exhibit of flayed, plasticized human bodies and organs. (If this subject makes you squeamish, do not scroll down any further-- pictures follow.)

With images of the exhibit having appeared on the news, on billboards, and in other forms of advertising, most of you here in the U.S. have probably seen at least one grisly image. So whether you're anxious or jaded about the subject at this point, I hope you'll keep reading.

I had some trepidation about going. I'd heard rumors that at least some of the bodies came from Chinese political prisoners, but the exhibition company and the government of China have both denied this. I went, not being sure what was the truth, and seeing this as an educational event unlike any other I was likely to see in my lifetime. An exhibit that combines science, art, and ghoulish gore? I had to go!

I don't consider human remains as being exactly sacred; it's the feelings of the living that must be considered. I reasoned that there was no chance that anyone who knew the bodies back when they were people would recognize a corpse and be traumatized. So we went.

The first image I saw was an advertisement:

Which made me really want to see what lay in store inside. This was not at all like the teaser art of the carnival sideshows I can just barely remember from my childhood, where what you were promised was more than what you'd see (the "Amazing Alligator Man" might just be a bald guy with a few snaggle teeth and a bad rash); this was a photo showing you exactly what you were in for. I was hooked. (This was an opportunity to see in real life the sorts of things I saw in photos as a child in my father's medical books-- my dad being a small-town doctor-- but in greater variety and arrayed with imagination.)

Besides, as a severed head, I got in for free.

I'll let the images speak for themselves, mostly. I can tell you that the exhibit made every attempt to give visitors a sense of how our muscles function (hence the poses of specimens kicking, throwing, etc.), and every display had ample text to educate viewers about what they were were seeing and how it all worked. Every organ had was labeled, even the smallest. The exhibition was divide into different areas by curtains, according to what biological systems and organs were being focused on. It was too much to take all of it, fully and with understanding, unless you had hours and hours. I felt that what you came away with seeing the exhibition depended on how much effort you put into it; full observation of all the details and relating them to the text took patience; and I suspect most people (including yours gruely) didn't spend enough time and trouble for a complete appreciation of the complexity of the human body. But I'm sure all visitors came away with similar feelings of wonder, fascination, and revulsion. And likely too, curiosity mixed with twinges of sadness about the nameless individuals whose deaths allowed their bodies to be a part of the display.

I know, I'm taking too long to get to the photos. Some of the photos are ones we took (the bad ones) and some-- most-- are photos taken by photographer Steven J. Messina, and graciously shared with this blog. His photos are all excellent, and the next best thing to actually seeing the corpses in person. (His photos all have a white border around them.)

A few were swiped from the net before I went to this exhibit, and I've forgotten where they came from. They will be removed upon request of the photographers.

One of the first sights seen at this portion of BODIES (other portions of the exhibition form different units, like different touring troupes of one circus) was this gleeful pose of a man dancing with his own skeleton: 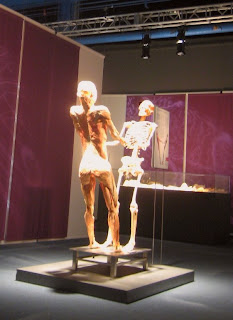 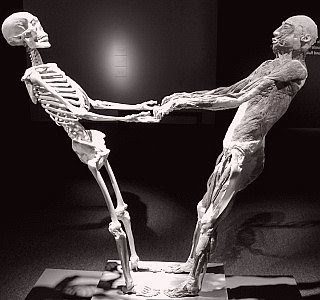 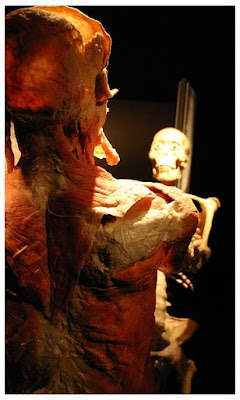 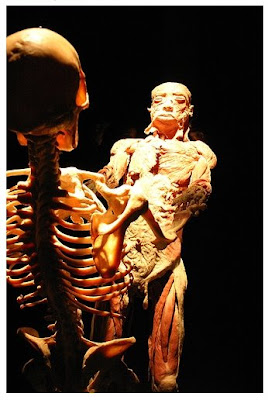 Followed by organs, more bones, and cross sections of people: 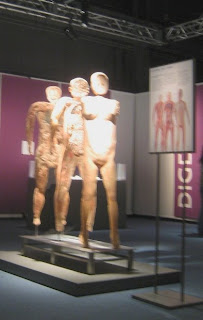 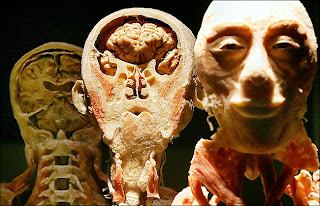 One of the strangest sights was seeing the brain, eyes, and nervous system all laid out, reminding me of monsters from sci-fi flicks like Fiend Without a Face and Mars Attacks: 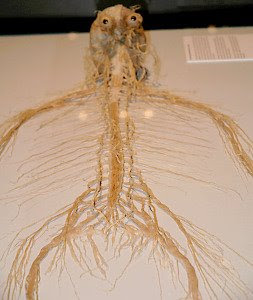 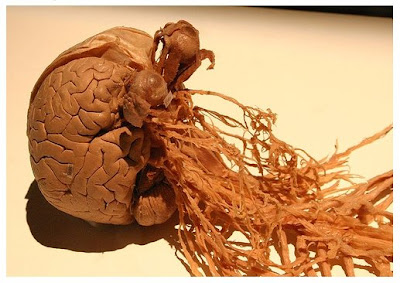 The top picture comes from the online version of Prick magazine, (as does the b & w photo found above) and can be seen as part of an article here.

Those staring eyes (the only real ones seen in the exhibit, the rest being glass so as to look shiny and alive) were very creepy to me.

But the most unnerving sight was one that reminded me of what I've lost, being a drunken severed head: (Related link to the above photo: Icelandic Penis Museum news item)
Posted by Max the drunken severed head at 7:16:00 PM

They call it art. But I'll bet so did Jack the Ripper.

That's wicked creepy. I wonder if people donated their bodies?

I've seen two of these exhibits, they are both amazing and surreal. It's fascinating to see how our own bodies are put together and how they work. It's like attending an exhibit of life sized "Visible Man" models.

I was thrilled to see it. Dark crazy woman as I am. The whole babies in jars and babies in cases kinda made me want to punch a monkey. Lucky for them, they had the babies in the last part of the exhibit so I chose to run quietly out of the room so as not to turn the museum workers into one part of the exhibit.
Thanks for sharing these!