There Will Be Blood Libel 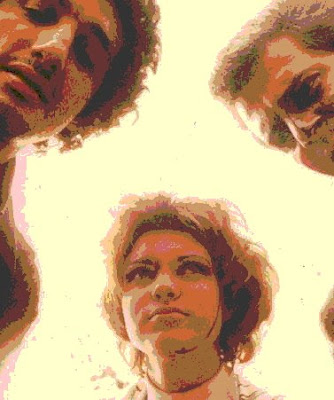 My first reaction upon seeing photos of the cast of the 2008 remake of LAST HOUSE ON THE LEFT was "Funny, they don't look Jewish." 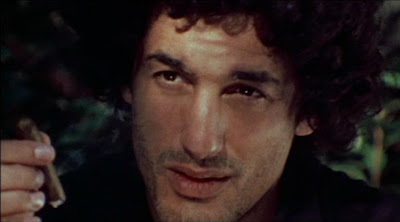 I consider Wes Craven's LAST HOUSE ON THE LEFT (1972) to be one of the great unintentional blood libels of the latter half of the 20th Century. I don't think for a minute that Craven is anti-Semitic but rather that he, like all of us, carries with him learned associations that exist apart from his conscious mind. Just as David Lynch has in the past identified a sense of evil in effeminacy (BLUE VELVET) and ethnicity (WILD AT HEART), Wes Craven particularizes in LAST HOUSE ON THE LEFT his perception of pure evil with a distinctly Hebraic flavor.
Though none of the characters identify themselves explicitly as being Jewish, David Hess' Krug is depicted as an obnoxious cigar-smoking "Jew Yorker" whose perpetual stubble, curly hair, olive-colored skin and outer borough accent code him as an obvious Heeb. Add to that, Krug has been convicted for the killing of a Catholic priest and two nuns. 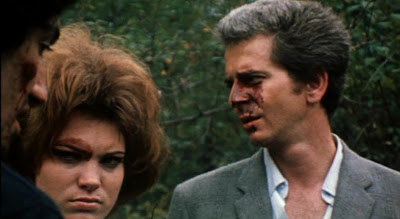 Cast in the role of Krug's accomplice, Weasel Podowski, Fred J. Lincoln wears the slate-colored hair and slack suit of a Lower East Side alter cocker while both Jeramie Rain (as Sadie, a common Jewish name that also brings to mind Manson killer Susan Atkins, aka Sadie Mae Glutz) and Marc Sheffler (as Krug's schlemiel of a son, Junior) have "difficult" ethnic hair. Weasel's rap sheet identifies him as a child molester, which fits the historical blood libel that slandered Jews as sacrificers of children. The quartet is shown to be "animal-like," to inhabit a dirty tenement (a dwelling associated with foreigners) and, while transporting their kidnap victims from the city to the country, Krug and Sadie engage in rear-entry sex (coitus more ferarum, or "sex by way of the beasts"), a form of copulation frequently associated (however unfairly) with non-Christians. 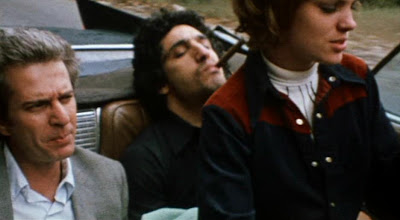 The transition of the kidnappers/killers from the city to the country is a key element of LAST HOUSE ON THE LEFT, illustrating an old white Anglo-Saxon fear of the contamination of suburbia's assumed purity by ethnic types (as Fairfield County, the film's location and setting, became a destination for upwardly mobile urban Jews post-World War II). The waspy surname of one of the victims and her parents, Collingwood, is eerily similar to Sadie's imaged alias (Agatha Greenwood), suggesting that Krug & Company aspire in some part to assimilate even while they shred the very fabric of Christian society. 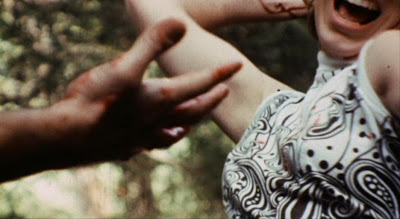 In the film's most disturbing sequence, Krug, Weasel and Sadie kill their captives after stripping them and humiliating them sexually. When Phyllis tries to escape, she is run to ground, stabbed and then butchered in a scene that can't help but evoke shechita, or Jewish ritual slaughter. Phyllis' intestines are pulled out of her oozing abdominal cavity and examined, as a shochet would do to determine if a slaughtered animal were fit to be declared kosher. Obviously, Phyllis' disemboweling is not genuinely kosher but does suggest that Krug & Co. are operating on autopilot, as if by collective cultural memory, in the same way that their earlier torment of Phyllis and Mari echoed the treatment of Jews bound for concentration camps. The kidnappers seem to be maltreating their captives as a form of confused racial self-hatred, channeling ritualistic acts that both glorify and slander their ancestors. 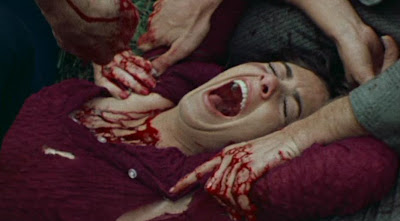 Having killed Phylllis, Krug rapes Mari... but not before he uses a switchblade to carve his name into her sternum. This gesture reminded me of Rabbi Lowe scratching the word "EMET" into the forehead of The Golem. (With his helmet hair, Krug even resembles Paul Wegener's iconic 1920 interpretation of THE GOLEM.) As EMET is the Hebrew word for "truth," Krug's mutilation of Mari might be said to be his way of sending a wake-up call to WASP society, announcing both his arrival and his intention to destroy their four-square, missionary position world. (In this regard, Krug also bears a resemblance to the character of Berger from the musical HAIR, who comes to his position of iconoclastic hippie king from a distinctly urban Jewish environment.) And can it be mere coincidence that Krug comes to his decision to shoot Mari after having overheard her reciting the Lord's Prayer, as she wades into a woodland pond in a cleansing act of self baptism? 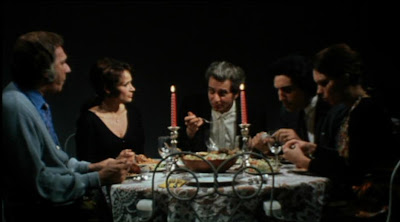 At this point it's worth remembering that LAST HOUSE ON THE LEFT is a remake of sorts of Ingmar Bergman's THE VIRGIN SPRING (1960), a Medieval morality tale set at a time when Christianity was waging war against Paganism for world and spiritual dominance. LAST HOUSE hews closely to the VIRGIN SPRING template by having its spree killers (who pose as salesmen, and in so doing aligning themselves with Jews via the merchant class) taken in by Mari's parents, who feed them in a scene that mimics da Vinci's The Last Supper (while leaving an empty chair in the foreground - for Elijah?). Over the course of the evening, the truth comes out and Mari's parents turn on her killers. While the ensuing slaughter is strong stuff, the third act's oddest/most brutal bit of business is Mrs. Collingwood's oral castration of Weasel in a scene that seems to mock the Jewish rite of circumcision (thus explaining the chair left empty for Elijah). It should also be noted that she performs this act after first using Weasel's leather belt to bind his hands in what could be construed as an allusion to the philactery, the calfskin box containing Hebraic scripture that some Jews wear strapped to their heads and wrapped around their left arms during weekday prayers. 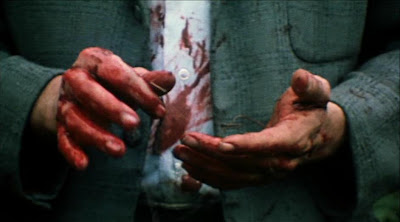 Again, I hasten to add that I don't believe ex-Baptist Wes Craven set out to slander the Jews with LAST HOUSE ON THE LEFT but the Jewishness of the killers he created cannot be ignored. My feeling is that Craven was writing/casting/directing instinctively from a series of societal and cultural presets and prejudices. Certainly, living and working (first as a taxi driver and then as a young filmmaker) in New York, Craven would have had plenty of negative experiences with people of all ethnic persuasions. I half suspect Krug was modeled on a particularly noxious distributor who blew fetid cigar smoke in Craven's face while cheating him out of profits. However it all came together, these textures (real or imagined) give the original LAST HOUSE ON THE LEFT intriguing layers of meaning. You won't find this kind of subtext in a New Millennium remake claiming to pay homage to 70s cinema while pissing all over a glorious, difficult and demanding decade that was never afraid to get blood on its hands.

http://arbogastonfilm.blogspot.com/
Posted by Max the drunken severed head at 10:36:00 PM