(BODIES...The Exhibition Part One found here. All photos with a white border were graciously loaned to this blog by Steven J. Messina. Caution: photos following may not be for the squeamish.)

In the exhibit, bodies posed to look like they were playing sports were placed at intervals to break up the drier educational tone of the other displays, as well as to counter the gruesomeness of it all. It had the opposite effect, at least for me-- by posing the corpses to make them seem more "alive", they seemed all the more gory and strange. I wondered why I felt that way, and I decided it was because the display of "movement" made me aware there were flayed bodies all around but there was no blood. This, and the captive aspect of "people" frozen in place were unnerving. (Of course this was something I read into it and completely subjective.)

The photo below, taken of a large poster for the exhibition, is one of a cadaver used in a lot of advertising for BODIES. 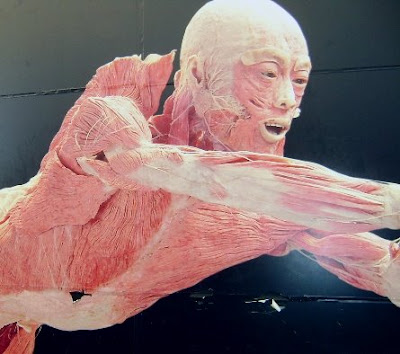 Here's a closeup I took of this figure when I saw it: 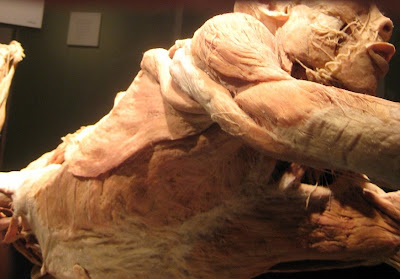 The details are what make bring on some of the moments of squeamishness. The photo below (from the Flickr account of Manuel Lino), shows the fingernails; they look even more "lifelike" than the plasticized flesh of the hand they are part of. 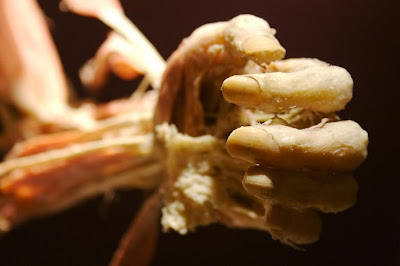 Hands are expressive. Perhaps that's why so many people who took pictures of the BODIES displays took photos of arms and hands, if the photos I've seen on the internet are typical. One photo I found at Marleen's Flickr account reminded me of the 1931 film Frankenstein, which features a closeup of a hand to reveal that life has entered the dead flesh of Frankenstein's creation. 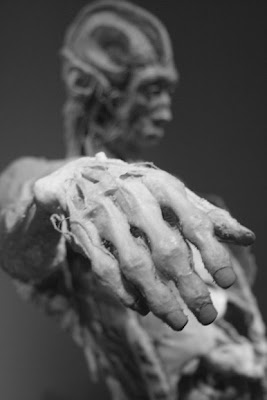 Of course, seeing various organs and parts of people on display is a Frankensteinian experience.

I hope this wasn't a criminal brain! (Or, for that matter, from a prisoner from overseas.) 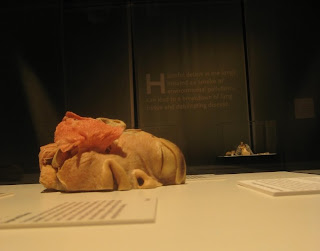 Colored resin was injected into the veins, arteries and capillaries of different systems and organs in the body to create perfect replicas. These were detailed down to the tiniest detail and were amazing in their intricacy. 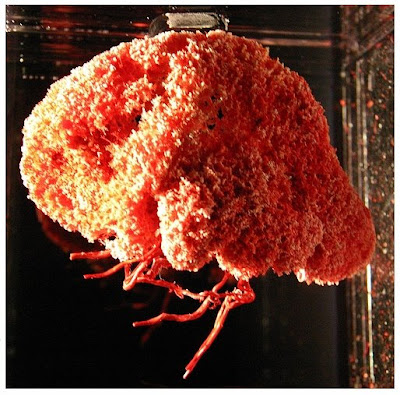 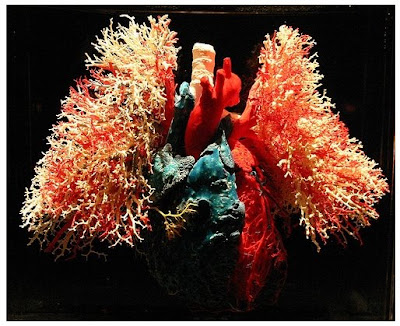 I was reminded of another movie, the 2007 Sweeney Todd (which Jane and I saw in January) when I saw the display below, comprised of cross-sections of an individual. The flesh resembles the cuts of meat you might see in a supermarket display case, and made me pause for a long while in sad and horrified fascination: 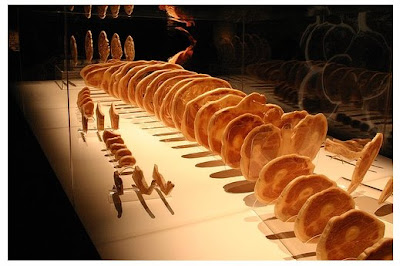 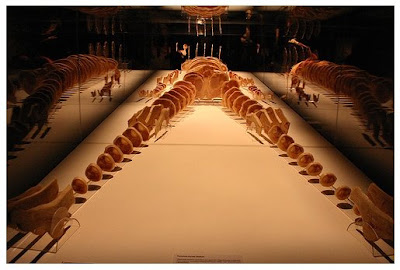 Still, I knew that making people more aware of their bodies as objects of flesh had possible benefits. Making people think of themselves as animated, thinking objects, like a car or computer, might also make people more likely to maintain their own bodies, as they would their cars. 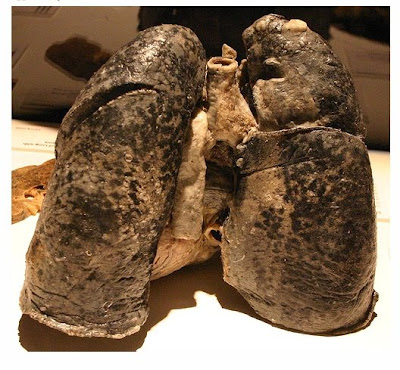 The display above was certainly designed to do that. Above is a pair of diseased smoker's lungs. Next to this disgusting display was a clear plastic receptacle for throwing away packs of cigarettes that visitors might have on them; many people had done so, and I hope people really were motivated to quit. (As a kid my father had done something similar-- he showed me cross-sections of preserved human lung he had in sheets inside a large binder; the lung samples were progressively more diseased from smoking. I never did take up the habit.)

Perhaps the displays would help people lose weight, too-- I know I didn't feel like eating for a good while afterwards. (Not even peanuts and crackerjack, despite all the bodies in sporting poses.) 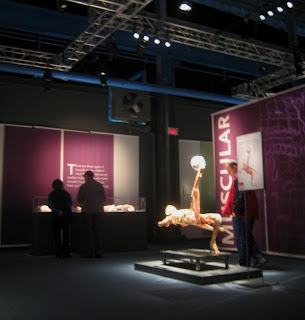 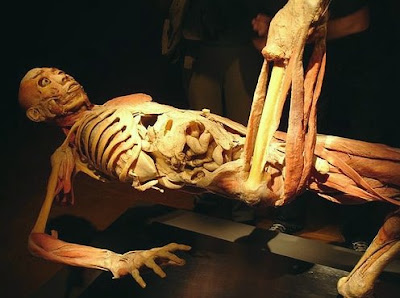 This was a display chosen to be used in the promotional materials-- see below-- and website; I assume the athletic corpses are supposed to draw in the average Joe. 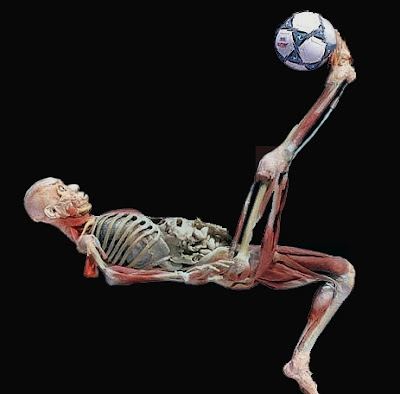 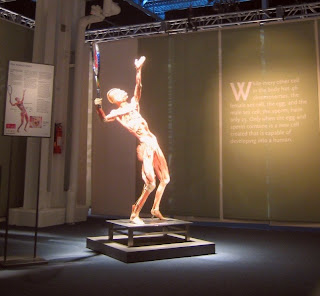 Also at the official website (but thankfully not at the science center where I saw the exhibition), Premier Exhibitions (the company behind BODIES) are selling trinkets for the customer willing to buy BODIES merchandise! If there is an afterlife, I'd be okay with people learning anatomy from my shell on display, but I wouldn't want to be on this: 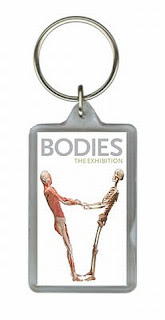 I'd expected the exhibit to be controversial, but there were no protests while it was here in Pittsburgh. I've heard of very little anywhere, (one of the exceptions being a small protest in Durham, NC.) I'm surprised, given that the cadavers are unclaimed bodies from China, not a favorite country of Amesty International. (Premier Exhibitions has an anatomist who examines the donated dead -- China, it's claimed, is not selling the bodies -- and he states that none of the bodies show any sign of wounds, trauma, torture or gunshots; all appear to have died naturally.) Various clergy have signed off on the ethical standards used by the company in obtaining the bodies from Dalian Medical University in China. I hope they're right.

A guide at the exhibit told me that no one had been upset enough to make a scene and be asked to leave, but that people of all ages --including children-- had fainted. On the positive side, medical students had raved about the displays; and doctors who visited often expressed a wish that these "plastinates" had been available for viewing when they were in medical school. (My own doctor -- mad, of course-- tells me there are not enough donated bodies in this country for all medical school classes nowadays, some medical students have to work with plastic replica cadavers with removable parts.)

At the end of the exhibit there was a wall where people could post comments on Post-It notes. Children were apparently asked to comment and give their ages; a few messages from kids were memorable enough to copy. One five year old wrote, "I thought I liked it." Another child named Samantha wrote "It was an very neat exhibit it made my stomach turn you should get more bodies". She drew a heart over her name. An eleven-year-old named Jared wrote, "I threw up in my mouth the whole time from when I started until up to now", and one older kid just left a drawing that made for a humorous end of the exhibit : 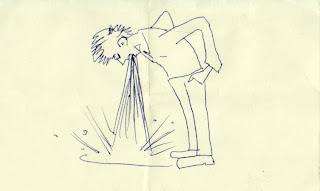 I hope this post didn't make you hurl.
Posted by Max the drunken severed head at 10:56:00 PM

bodies came to Colombia, it feaked people out!! so crude!

lol the drawing is cracking me up. the bodies exhibit i saw, it was hubby's and my first date, hehe. so appropriate.