A report on "Schlitzie's Day" 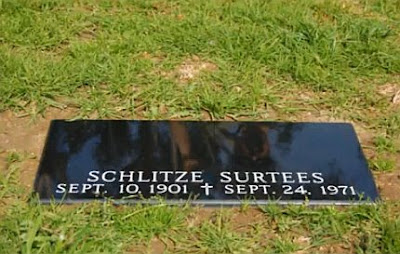 Verne Langdon sent the following report (with minor editing by me) on the memorial service and headstone dedication held for Schlitzie, the "pinhead" who was exhibited in carnival sideshows and immortalized in the film Freaks. Many people had contributed financially, and with their time, so that Schlitzie could have a gravestone. On Feb. 20th, the 77th anniversary of the premiere of Freaks, fans and friends gathered to pay tribute to Schlitzie's memory. 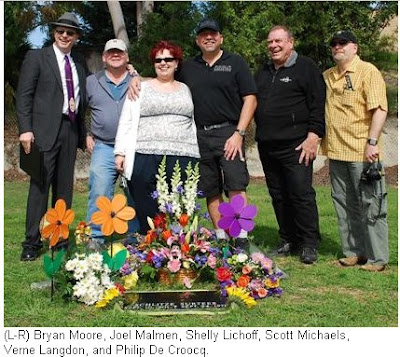 SCHLITZE'S DAY was a resounding success.

On February 20, 2009, a group of friends from http://www.findadeath.com got together to hold a memorial service for Schlitze the Pinhead, whose earthly remains lay in an unmarked grave for nearly 40 years.

Following a beautiful journey to Queen Of Heaven Cemetery in Rowland Heights, California where Schlitze's remains are interred in a now-marked grave (see photo), those in attendance dressed the gravesite in beautiful floral arrangements, and Bryan Moore - himself an enormous Schlitze fan and historian - magnificently delivered an extremely well-constructed eulogy accompanied by a brief, emotional tribute to Schlitze by writer-composer-musician-producer Verne Langdon, who actually met, observed and knew Schlitze.

After a near hour-long service and photo ops at the Schlitze gravesite, the group of nearly 30 Schlitzephiles from all over the United States proceeded to world-famous downtown Los Angeles local eatery Philippe's, home of the mouth-watering double-dipped beef sandwich as well as other fantastic food fare. Philippe's was a part of Schlitze's life in that he - along with other members of the legendary Paul Eagles Circus & Carnival Club - dined there often when wintering in Southern California. Following Philippe's it was on to hallowed haunts of Schlitze, including MacArthur Park in downtown Los Angeles where Schlitze would chase the ducks and his caretakers would sell his never-ending supply of souvenir photos from Schlitze's glory days on the various carnival midways, Schlitze's last known residence as verified on his Official Certificate Of Death, and of course the county care facility -Fountain View - in Hollywood, California, where Schlitze spent 48 hours or so before expiring on September 24, 1971, of Broncho Pneumonia brought on by Medullary Depression.

"Schlitzie - he had no choice. As I grew older I had a choice. I could stay in
show business if I wanted to. He had no choice, so - I don't know how to
express it about him but he - he just wasn't able to do anything else. Quite
often you would get a crowd that thought they were funny, that they were
funny and they would torment him or something like that but usually there
were some roustabouts around that would see that that was broken up in a
hurry and they were not allowed to torment him."

- Jeannie Tomaini, the half-girl, in "Freaks Uncensored"
The day was memorable for so many reasons, and may turn into an annual event, held on the 20th of February each and every year -- the day we have come to know and love as "Schlitze's Day"! 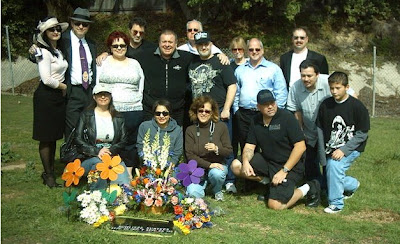 A slideshow presentation by Phil De Croocq on the day's events can be seen here.
Posted by Max the drunken severed head at 1:47:00 PM