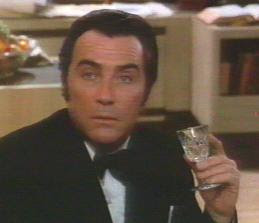 The suavest, most archly snarky vampire of them all, Count Yorga, has left us.

Actor Robert Quarry died on Feb. 20. ; as a fan of his intelligent acting in genre films, I'm sorry to know that he's gone.

Before he was moved to the hospital section of the Motion Picture Home in his last months, I spoke to him by phone. We had a nice chat, and he invited me to call back. I never did, sadly.

He was taken advantage of financially in his final year, but he also heard from many old friends and even more fans, and received many gifts. (My friend Raymond and I sent him a print of a wild day-glo portrait of Count Yorga that was used for the box art of a Mego '70s vampire doll.)

He'd had to leave behind his vast LP and tape collection. I remember asking him about sending some CD replacements; in particular, a recording of Boris Karloff in an audio production of the Bard's CYMBELINE. (Quarry had done many Shakespearean roles in his past stage career.) I said, "Mr. Quarry, do you like Shakespeare?" He replied, deadpan, "Well, he was a LOUSY dancer..."

(He also knocked Boris' performance in it, too, but he was friendly to me throughout the call.)

Another example of Quarry's humor comes from an interview found at "Tim Sullivan's Shock and Roll" at upcominghorrormovies.com:

"I had more dialogue in the first Yorga picture than Christopher Lee had in all his Dracula movies combined. Poor Christopher. They would have him just stand there with red contacts and whitened face, lightning and fog behind him. He had very little to do other than play the costume. Play the fangs. And that is what I think is wrong with so many of the “monsters’ in movies of late. They are just men in masks with knives going Boo! There’s very little for them to do as an actor. I hate those gore pictures. You know, the ones where one minute you’re alive, next minute your dick’s on the floor! (laughs) Anyway, with Yorga, I had the opportunity to show his charm, his elegance. I figure if you’ve lived 250 years, buddy, you better have a sense of culture and a sense of humor, or else you’re not gonna make it through lunch!"

(To read more of this excellent interview, which includes Quarry's ideas for a "Yorga" sequel that never came to be, click on the link above.)

My friend Ted Newsom related this Quarry anecdote over at the Classic Horror Film Board:

"I co-wrote [the film] TEENAGE EXORCIST with Brinke Stevens, though I asked for my name to be dropped off in a stupid fit of pique and hurt feelings. But therein lies a Quarry Story.

"Fred Ray came up with the original idea-- a girl in a haunted house. That was pretty much the idea, except he wanted an excuse to use up some voice-over and unrelated footage of John Carradine he had. We met with him once, wrote the script, had one discussion afterward, and that was it, otherwise the script was our baby.

"It was my idea to have an ineffectual priest with teeny nods to The Exorcist. I named him Father McFarren after a teacher of mine who had been an ex Jesuit (and became, later, a magician and pagan), so it was natural to push that and make him a stereotypical Irish priest. The project never happened with Fred, but he later sold the script, with the insistence that Brinke still star, to Grant Waldman, who spent a lot more money and time than Fred ever planned (3 weeks, SAG shoot) and cast Quarry. (Then screwed it up by casting Eddie Deezen as what was supposed to be a 16 y/o pizza delivery girl/cheerleader and heredity demon slayer named Buffy... 3 years before the original Buffy movie... Anyway...)

"The second time I met Robert Quarry was at Fred's house, at a party, shortly after that. I asked Quarry, whom I really only conversed with for the first time that evening, "What's this Teenage Exorcist?"

"He answered in the most delightfully supercilious, waspy and bitchy tones possible, "Oh, well, I only did that as a favor to Fred because they needed some gravitas, you know. It was this little Nothing of a script. Well, it was written by (dripping with sarcasm) Brinke Stevens, so you get some idea. There was this nothing of a role, a priest, so I decided to play him like Barry Fitzgerald (exactly the way it was written), you know, all "Sure'n'begorragh,' (ditto), and I sit the zombies down and sing "Toura-Loura-Loura" (ditto) and amaze them with card tricks (ditto). I ad-libbed all the way through it to make it into something." (Not one word wasn't in the script. I went through it line by line a couple years ago and was surprised how close it was.)

"I smiled, nodded sympathetically and said, "Yeah, I know. I co-wrote the script."

"He gracefully turned on a dime 180 degrees and said, "Yes, well, it was pretty good for that sort of thing, it was fun. Good job."

Requiescat in pace, Robert. Travel well in "the undiscover'd country."
Posted by Max the drunken severed head at 12:47:00 AM

Quarry was one of my favorite actors and his YORGA films were highlights of my childhood growing up. He brought a seriousness to his roles the equivalent of Peter Cushing and Christopher Lee. It's a shame he didn't get the chance to do more horror movies in the 1970's. Those few genre films he did, he did with a lot of class and reverence.

Although I never cared much for the Fred Olen Ray movies he appeared in, it was still a great joy to see him working. At least those later movies made his 70's horror pictures all the more memorable and gave another reason to revisit them.

This is the first I heard of Mr. Quarry's passing. I loved him in the Yorga films, Madhouse and Dr. Phibes Rises again. Whenever he was on the screen he commanded your attention.

Thanks for dropping in and sharing your comments!