If you love classic monster comics from the Golden and Silver Age of comics, you'll probably enjoy a new comic inspired by classic horror comics and old monster movies called Bane of the Werewolf. The first issue came out this month; orders can be taken here.

Created, written and illustrated by Rob E. Brown [REB] of Marvel Comics fame, it's a horror comic book that re-establishes the classic gypsy origins of the werewolf legend in mid-16th century France. (Think of the Hammer film Curse of the Werewolf.) The main character, Eliphas Moreau, finds himself at the mercy of a malevolent book, passed down through the ages and only entrusted to gypsy chieftains. Contracting lycanthropy (werewolfism for you non-highbrow types), he is "bombarded by the many horrors of the occult world...while he struggles to keep his humanity intact as he fights to save the people he loves," (or so saves the wordy press release, which goes on to say, "The comic is akin to the silver-age horror comics produced in the 1970s, with guidance taken from black and white, classic horror films of the 1930s-40s.")

The art and writing solid and I'm looking forward to more issues. Recommended. 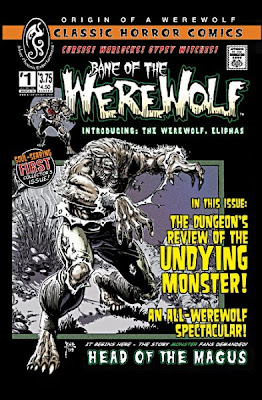 The Making of Bane of the Werewolf.
Posted by Max the drunken severed head at 12:01:00 AM