The Return of Rozum! 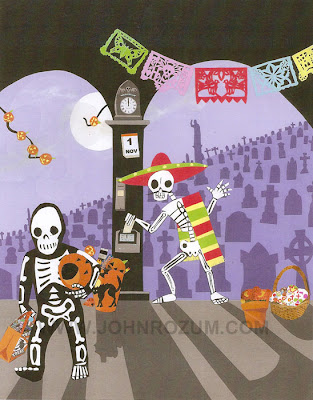 The immensely talented collage artist (and writer) John Rozum has announced that his blog is coming out of hibernation next week! (He must have burned off all his winter fat by now.)

John is a friend, and I talked to him by phone yesterday about his return to the active ranks of creepy chatterers. As his blog is not on the Rondo list of nominees, I naturally tried to find his price for endorsing ME. He admitted he could use the money, but feared offending nominated (now former) blogger Tim Lucas, whose multi-award-winning book MARIO BAVA: All The Colors Of The Dark could be wielded as a formidable weapon, as it weighs twelve pounds.

Guess I can't blame John for valuing his safety. The coward.

So enough about Rozum. I hope his blog is plagued by locusts. (But not before YOU go there and see his fantastic collages.)

About Tim Lucas' book: It's an EXCELLENT tome for all film fans. You can buy one by clicking here or here.
Posted by Max the drunken severed head at 2:29:00 PM

'Fat?" "Coward?" I see you've resorted to trying to seduce me into endorsing you with sugar coated flattery.

I guess when you spend all your time rolling across the floor chasing dust bunnies, you've got to stoop pretty low to get what you want.

In all fairness to Max, the Rondos, and the 46 followers of this blog I hereby declare that I stand behind Max -- by at least 200 feet at all times.

I am going to give Max, and his amusing, as well as occasionally informative, blog 100% of my consideration when voting for best horror blog of 2008.

Your check's in the mail, John.