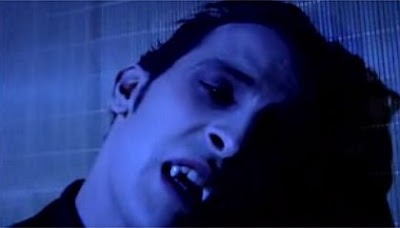 So I'm doing stuff to insulate Casa Cabeza, and trying to lower my energy costs, when I came across a couple of videos about "vampire energy." (This is the energy wasted by the standby modes of appliances like dvd players, microwave ovens, and computers; the energy used when things are off but plugged in.)

I found two videos on the subject, and thought I'd share 'em. The first is shot like a short horror film, with a clever variation of the bite mark made by a vampire. The second one, though less fun, is more informative about "vampire energy."

You can use less energy when writing out your Rondo ballot by typing "TDSH" when you come to the category "Best Horror Blog." TDSH has fewer letters by far than the names of all the other nominated blogs, and the ballot counter will know what you mean!

I could take time to scientifically demonstrate why I'm the best blog to vote for, but that would waste extra energy. So just vote for TDSH because it's "green conscious," okay?
Posted by Max the drunken severed head at 3:38:00 PM