This bloggin' habit is a bit tricky. It doesn't pay anything, so you don't want it to become too much of a chore. On the other hand, if you only post when the spirit moves, you sometimes don't post often enough to get people to visit regularly, and your audience dwindles. (And God knows I need an audience.) Well, ya can always post movie reviews, but, hell, everyone does that. SO, I'm gonna share fantastic factoids on Thursdays, and posts about about weird stuff I own on Saturdays. And post on everything else at other, unscheduled, times. (Like the recent, first-time Dracula Con in Winber, PA, more on Wonderfest in Kentucky, and a trip to a costume shop.)

One thing in all "my stuff" is a full set of 1979 Alien bubblegum cards. I love having them. I was very young in 1979, and Alien scared the crap outta me. It's still one of the most atmospheric, claustrophobic, and suspenseful films I've ever seen. I rushed to buy the cards when they came out. I wanted to preserve those amazing images, in those days before most people had access to a vcr, to remind me how I felt watching the movie. 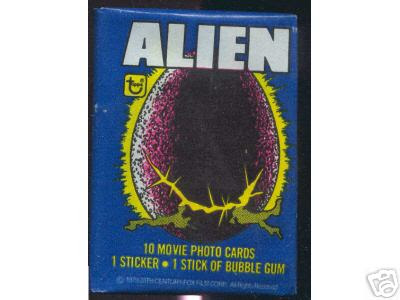 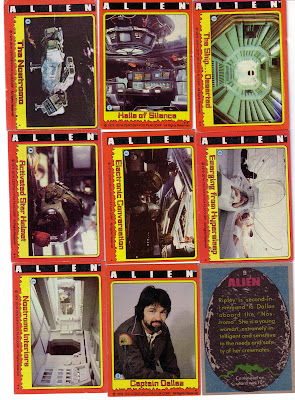 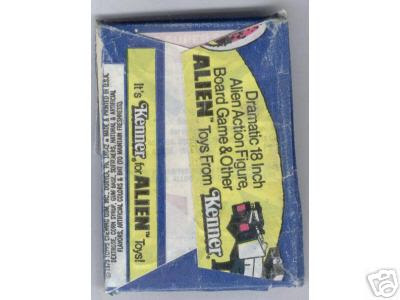 The photos above are ones I borrowed from someplace on the web years ago. My cards are all now in an album, although the stickers, gum, and wrappers are long gone. (Wish I still had the stickers and one wrapper.)

You can imagine how excited I was to meet the movie's title monster at the recent Wonderfest con! He was shopping in the dealer's room, but when he realized I'd recognized him (his sunglasses didn't fool me!), he left. I caught up with him in the display room and asked for his autograph, and THIS is how he responded: 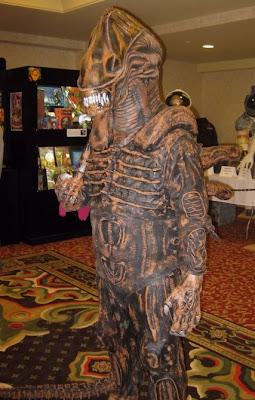 In case you can't tell what he's doing, he's flipping me the bird: 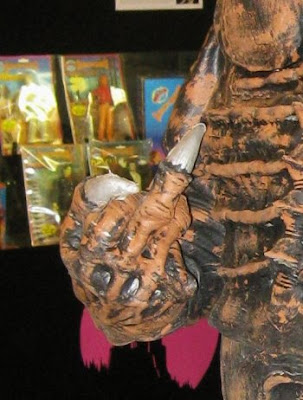 Guess some celebrities still cop an attitude, even when they aren't a box-office draw anymore. Jerk. I bet none of the other stars from that film act like that toward fans, even though none of THEM have worked much in recent years EITHER!

I hear the alien from Mac and Me gladly signs autographs.
Posted by Max the drunken severed head at 1:11:00 AM

This is the second time "Mac and Me" has been brought up by someone I know this week. That's scary.

Amazing coincidence: I'm sitting here with my iMAc... Mac and me! Get it? Get it?

Sigourney Weaver: Is that a bursting Alien or are you just happy to see me?