Back in late April, the first-ever DRACULA CON was held at the Arcadia Theater in tiny, picturesque Windber, PA. (Well, the first event with this name was held; hasn't the venerable Count Dracula Society ever held a vampire or Dracula con of some kind?) The Voodoo Queen and I attended, as it was practically in our back yard.

Having no idea what to expect in a first time event, we were happily surprised to see something parked out front we'd never seen before: a motorcycle hearse! Didn't get a picture in time before it was driven away, so here's one taken from the Dracula Con site: 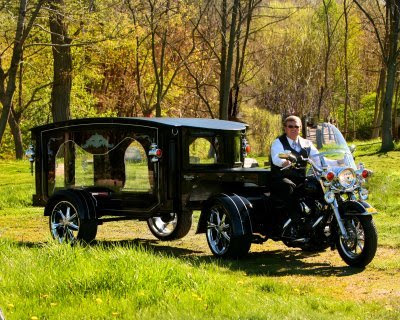 We'd had just missed an American Red Cross blood drive held next door in conjunction with the event, but were happy to know the event was promoting a cool cause.

Also outside, and in the lobby, were an awesome assortment of various vamps, patrons, and members of the evening musical acts: 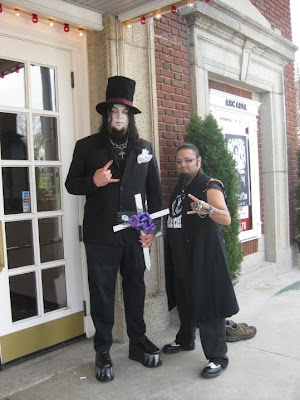 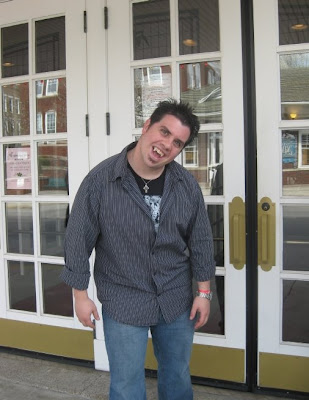 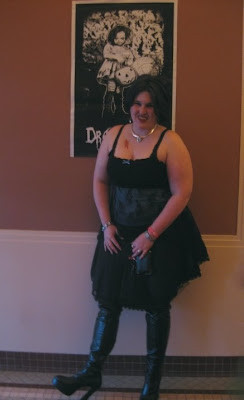 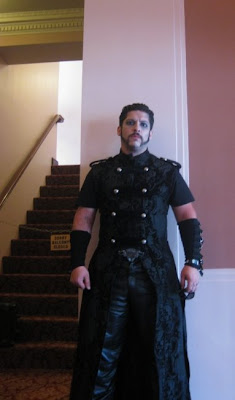 Even the ticket-taker for the event was appropriately bloodless: 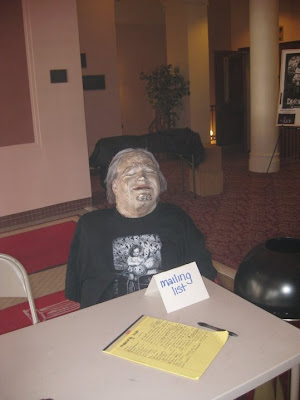 I was told he'd been a prop in a horror film-- he was certainly a good display to set the mood.

The striking image on his t-shirt was the official artwork for the con: 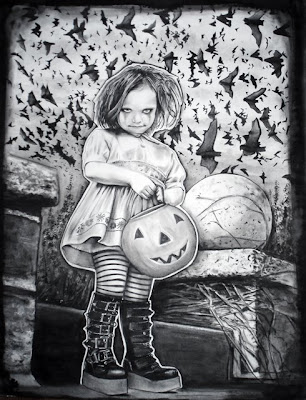 Wow. Jane had to get the same t-shirt! We also bought a print of this Halloween half-pint. The art was done created by artist Mike Mararian, who we were unfamiliar with, but who instantly became one of our favorite artists!

One attractive vamp arrived AS the girl in the art: 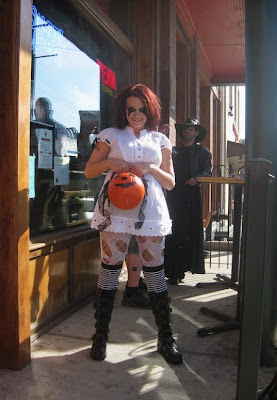 Before the afternoon's guest speakers arrived, attendees were entertained in the lobby by talented closeup magician Mark Swindler: 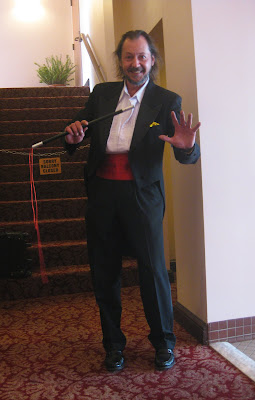 Unfortunately, there was no vampire theme or horror angle to his illusions, (not even a cape to go with his tux!), but his prestidigitation was impressive, and an amusing feature we hadn't expected at an event like this.

Inside the theater was the event's hostess, an affable jazz singer called Phat Man Dee. She made small talk about the event and sang songs both "on topic" and off. She had a good voice, but was backed by music on a CD, which sometimes worked, and sometimes didn't, as the music wasn't always, well, lush enough to back up her vocals. (Yelling up to the booth to tell them which track to play was kinda jarring, too.) Still, she was a good choice for hosting. 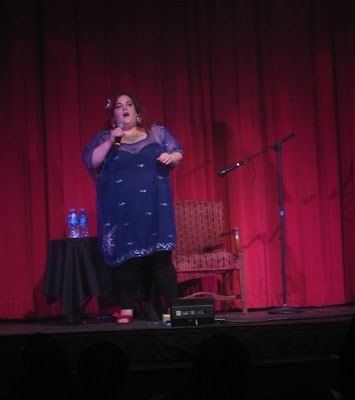 Then it came time for the guest speakers. Dracula Con organizer Blair Murphy, a friendly, energetic, enthusiastic guy formerly in the entertainment biz in L.A., came onstage. (Murphy lives in the town's haunted hotel, the Grand Midway, although closed, Murphy hosts a number of both private and public events there.) He introduced the first guest, writer Rosemary Ellen Guiley (Encyclopedia of Ghosts and Spirits). Ms. Guley is a writer for Fate magazine and a paranormal investigator. 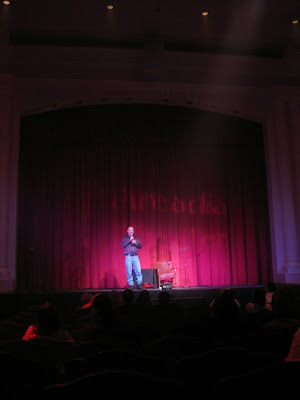 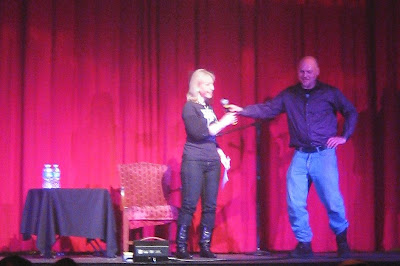 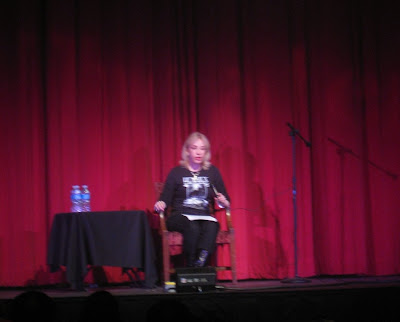 Ms. Guiley was entertaining. She knew how to tell stories, (though she had to rely on her notes from time to time) and related anecdotes from her research on vampirism in history, folklore, and modern culture. Interestingly, she sometimes referred to stories in vampire folklore as incidents in the "vampire cult." Although not a believer in the traditional vampire, she said she believed in vampires that "vampirize your energy, luck, and beauty." She believes in "shadow people in another dimension" who come at night to vampirize and "get established." (Beats having to get a green card, I suppose.)

She did have a sense of humor about the subject. One anecdote concerned an "alleged murder victim" in 1950s Romania who came back as a vampire, and rode in "a car that looked like a coffin." A Batmobile, you might say.

Sexuality, a frequent subtext in modern representations of vampires and other bloodsuckers (hey, the lawyers in Boston Legal are always doin' the nasty), was no taboo subject at the con.

But more on that in Part Two!
Posted by Max the drunken severed head at 1:29:00 AM