The West Coast AT LAST has a convention for classic monster fanatics. The first ever MONSTERPALOOZA was held in May in Burbank, CA, and by every report, was a superb event. Crammed with models, masks, makeup and effects artists doing their stuff, panels and presentations, genre actors to meet, and vendors galore, the buzz afterward has been overwhelmingly positive. Better than a poke in the eye with a sharp stick! (Or a missile, in the case of the above pic.) Creator/producer Eliot Brodsky deserves a kajillion kudos! 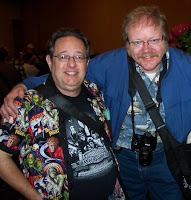 "I don’t want to sound like I’m complaining or anything, because where I live, Southern California, is a pretty easy place to get used to. Sure our hills catch on fire every summer, and the ground shakes a bit from time to time, but we don’t have tornadoes, blizzards, floods or even much rain or snow on a regular basis. However, you’d think that the Los Angeles area, center of the film industry, home of Special Effects and Mecca of Monster Make-up could muster one measly little interesting show for those of us who enjoy our creepy creatures and menacing menaces and all the products and memorabilia that comes with them every once in a while. We’ve had shows in the past, but they’ve come and gone, leaving us reading us reading about far off places like Kentucky or New Jersey or even England where annual shows celebrating monster stuff, horror films and all the accoutrements are well-attended events. Well, we finally got a good one, Monsterpalooza! It’s about dang time.

"Presented by Elliot Brodsky’s Rubber Room, a site devoted to collecting all sorts of latex masks, Monsterpalooza was held at the end of May in Burbank, right across the street from the Bob Hope Airport. The venue was the Marriot Hotel Convention Center and it was the perfect size for the event. Not so large that everything was spread out and not so small that everyone was piled on top of each other. The great thing that was done with this show was securing the participation of many of the Special Effects shops that are in the near by area. Not only did Amalgamated Dynamics, KNB EFX, The Chiodo Brothers, Burman Industries and many other high end movie effects and make up companies attend, they brought some of their coolest stuff along and set up a walk through exhibit featuring dozens of full sized creatures and props from movies too numerous to mention. 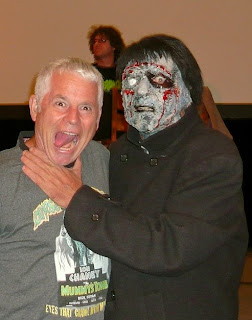 "This display was complimented by panels, discussions and demonstrations of make uptechniques as well as tributes to well-known makeup artists of the past like Jack Pierce, John Chambers, the Westmores, Tom Burman and Dan Striepeke. 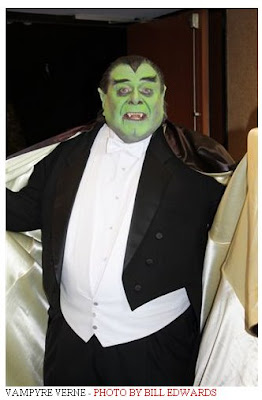 brought his special knowledge to the eager crowds. Even Don Post Jr. was in attendance and discussed his father’s famous maskmanufacturing studio. Many more events including a tribute to Vincent Price, film screenings and tips on prop and wardrobe collecting rounded out the three days of monstrous celebrations.

"James Warren, publisher of Famous Monsters of Filmland, Creepy, Eerie, Vampirella and many other beloved magazines, gave a talk about the behind-the-scenes happenings of his publications. I listened to Jim Warren's talk about the "true" story behind Famous Monsters. It was very interesting, but not as surprising as he seemed to think it was. He turned out to be very congenial and very friendly and talkative.

"Of course there were dealers there with tables piled high with wonders of all sorts. Masks, make up supplies, model kits toys, jewelry, t-shirts, accessories, belt buckles, art work, prints and enough monster junk to make the most hardened collectors dig into their wallets. Autograph seekers could meet and mingle with actors Julie Adams, Brinke Stevens, Michael Berryman, Doug Jones and Margot Kidder, as well as artists Bernie Wrightson, Bill Stout and Frank Dietz, plus the many special effects artists and makeup artists in attendance.

"There was even a model contest sponsored by Amazing Figure Modeler, which drew a respectable number of high-quality entries. It was a very full monster weekend, something we in Southern California have been hoping would appear for a long time. Now we have to hope that it re-appears next year!" 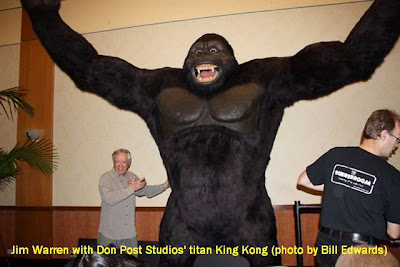 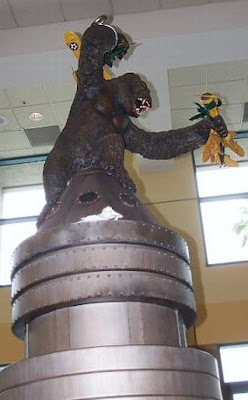 To see a plentiful plethora o' pictures from the event, check out Jim Bertges's Photobucket album of Monsterpalooza pics, and/or check the fantastic fotos from the fine folks of the Halloween Mask Association: Page 1, Page 2, Page 3, Page 4, Page 5, Page 6. 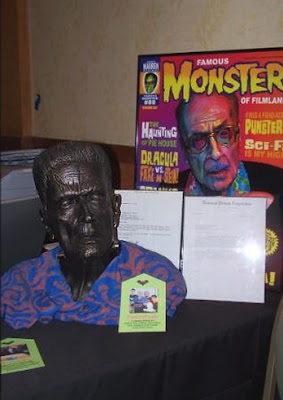 Forry Ackerman would have approved!
Posted by Max the drunken severed head at 3:06:00 AM