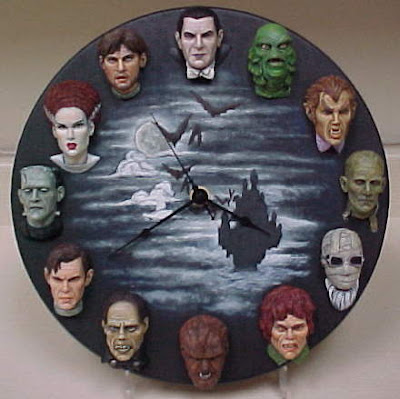 Above is a clock that is on the wall next to my computer. I cherish it, because it was painted by my late friend Linda Miller. She did a magnificent, detailed job.

Every character on the face was someone Linda and I (two classic horror film fans) mutually considered a "friend" if entertaining folk from the fictional film universe can be considered "friends." Do you recognize all the characters, and can you name all the actors behind the roles?
Posted by Max the drunken severed head at 4:41:00 AM

fantastic clock! i think it's great you have it to remind you of your friend. she was very talented.

hope you're having a great weekend!

Okay, now I'm incredibly jealous!! Beautiful clock. And what a wonderful memory of your friend.

Oh wow! I love that clock!