A benefit concert to help long-time Ohio horror host Dr. CREEP (Barry Hobart) will be held July 18th, from noon to 10 p.m. at the Snyder Park Band Shell in Springfield Ohio. The free event--donations gratefully accepted--promises to be a blast; there will TEN bands on the bill, as well as "games, food and fun!"

Dr. Creep was the host of the show Shock Theater, broadcast from Dayton's WKEF from 1972 to 1985. It was revived as a public access program from 1999 to 2005. Dr. Creep is featured in the recently released documentary on horror hosts, American Scary. 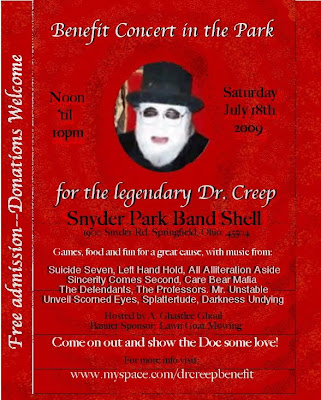 Well, the Dr. is having hospital trouble--as mad scientists often do--but this time he's incurred heavy bills due to serious health issues, and his friends are organizing a fun fundraiser for him.

Here's one of his friends, G. Howie Bledsoe, Embalmer (a/k/a Art Bausman, who in real is noted for his charitable work, and as the organizer of annual party called "Frank-en-Fest", where many different kinds of food, frankfurters and Frankenstein films are served up outdoors.). 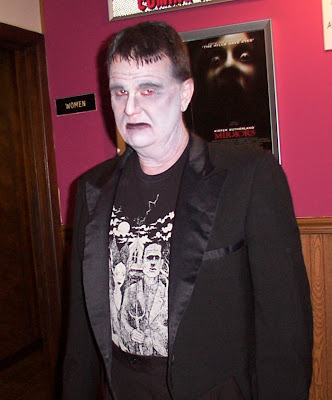 Bledsoe and Creep at Horror-Fest: 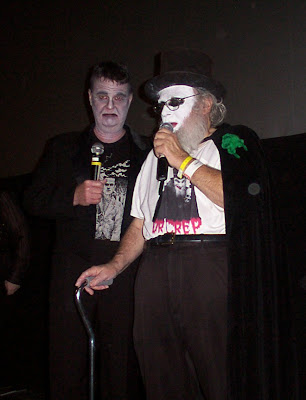 Hobart, like Bausman, is also known for his charity work, having co-founded Project Smiles, an organization "which collects toys for needy children in the Dayton area around the holidays." 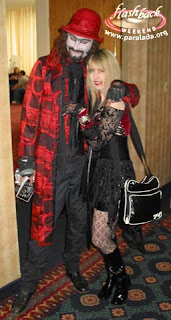 The Benefit Concert to Help Dr. Creep is organized by A. Ghastlee Ghoul (Bob Hinton) a public access horror host whose program The Ghastlee Movie Show has been airing since 1989!
Posted by Max the drunken severed head at 12:04:00 AM