What do you do with a drunken badger?

BERLIN (Reuters) – A badger in Germany got so drunk on over-ripe cherries it staggered into the middle of a road and refused to budge, police said Wednesday. A motorist called police near the central town of Goslar to report a dead badger on a road -- only for officers to turn up and discover the animal alive and well, but drunk.

Police discovered the nocturnal beast had eaten cherries from a nearby tree which had turned to alcohol and given the badger diarrhea. Having failed to scare the animal away, officers eventually chased it from the road with a broom.

Happy-looking badger statues are not uncommon in Japan. Here's one with a sign attached inviting everyone to "drink sake with him": 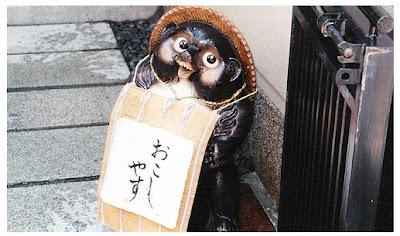 A NSFW photo of a topless badger Furry drinking a brew can be seen here.

A picture of a badger that might be drunk can be seen here.