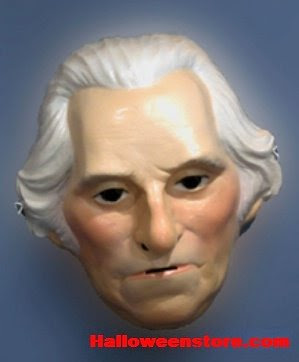 Okay, it's July Fourth, and the USA is celebrating its national birthday. I've started the partying early, having had 3 kegs of Sam Adams already, and I can't remember if today is "Triple Trivia Thursday" or "My Stuff Saturday". So I'll cover both ends. First some relevant trivia:


Although most people now believe that George Washington's wooden false teeth were an invention of folklore, he in fact DID have wooden teeth. Unfortunately for the Father of Our Country, they were carved from a log in the petrified forest, making his jaw hang low from the weight. People used to say, "Why the long face, George?" and then snicker. He hated it. In fact, when all of Washington's slaves one day laughed openly at his stone choppers, George had all their teeth pulled in revenge, and made them all his indentured servants.

Reese Witherspoon is a direct descendant of Declaration of Independence signer Rev. John Witherspoon. (Witherspoon is not the original family name, which was Wiltfork. But soft 'r'- speaking New Englanders say "Wiltfork" as it were a command for some guy named Wilt to do the nasty, which embarrassed the good Reverend.)

The first copy of the Declaration of Independence printed in Salem, Massachusetts was printed on human skin, taken from a confessed witch. Her body was later tied to the pull-rope of the Liberty Bell, so patriotic folks in Philadelphia could enjoy the fun of a public execution. Ironically, her name was Belle Clapper.

Now here's a pic of an item from My Stuff--well, I should say OUR stuff, since my wife made it: 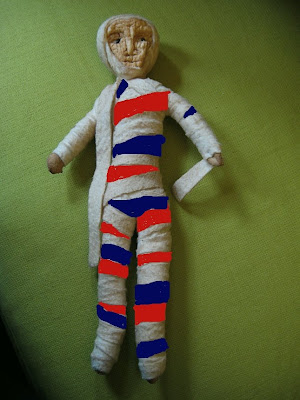 It's a dried-apple-head mummy doll, made by my wife Jane, with crude photoshopped patriotic stripes, added by yours truly!

I think his face kinda looks like George Washington's, if George lived to be 103 and really wrinkled.

The right to share this with YOU is a facet of the liberties I enjoy. Happy 4th to everyone living in a democracy everywhere!

Edited to add: One of the trivia facts in bold above IS actually and for really real true!
Posted by Max the drunken severed head at 1:06:00 AM

Happy 4th of July! And no offence, but Sam Adams makes the WORST beer since Alexander Keith.

Is it just me, or does that George Washington mask look like Peter Cushing?

Pierre-- Yes, if Cushing was on steroids, I think.

I wonder if Cushing fathered any countries (that he knew about, anyway)?