This has been a good week. Voodoo Queen and I acquired a new pet, and took a trip to a famous cemetery.

The new pet is a garter snake caught in our back yard; it joins two cats and a deceased, preserved tarantula in a glass picture box. The cats are showing a lot of interest in the new pet, which is kept safely out of their reach.

Here's a pic of the kind of the so-far-unnamed new pet we've got; haven't yet taken a picture of our own just yet. 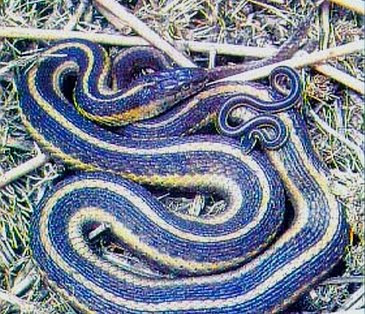 The cemetery trip was to visit Evans City Cemetery, where several scenes where the original Night of the Living Dead was filmed. A caretaker told us that "at least 5 people--and up to 10-- come every single day of the week" to see the portions of the cemetery that are seen in the film.

Sadly, the old chapel near the entrance, which is on screen in the opening of the movie, is being torn down this weekend or early next week, he said. Photos from our trip will be posted soon.

There was news of a newly discovered species of carnivorous plant being named, and I thought that it would be a cool addition to our home. 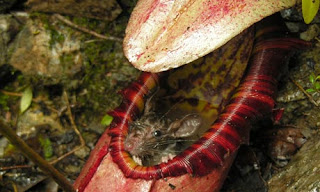 Not that we'd feed mice to it, though. Just annoying salesmen and salvation sellers who come unbidden to our door, if we could grow the plant large enough.

(For video and another photo of a pitcher plant eating small rodents, click here. Not for anyone who likes mice.)
Posted by Max the drunken severed head at 1:52:00 AM

Quote: There was news of a newly discovered species of carnivorous plant being named, and I thought that it would be a cool addition to our home.

They named it after David Attenborough? Come on! It shoulda been called "Audrey II".

You are so right, Mike! Or even after Jonathon Haze or Jackie Joseph!

Audrey II is much too tame. I prefer The Disemboweler.

Pierre, you always seem to be eating when looking at my blog! One would think you'd learn.