Today, the blog Frankensteinia has hit its two year anniversary. It has been a noteworthy site, and I congratulate blogger Pierre Fournier on keeping up the good work on a regular basis for two years now. It stays interesting and fresh, and for that reason doesn't seem to have been around for years.

The blog's penchant for uncovering new details about, and sharing fresh perspectives on, the central subject--characters created close to two centuries ago--helps keep that subject not just alive, but vital.

Frankensteinia's post for today features a photo that haunted me as a child, when I first saw it in the pages of the magazine Famous Monsters of Filmland (#35): 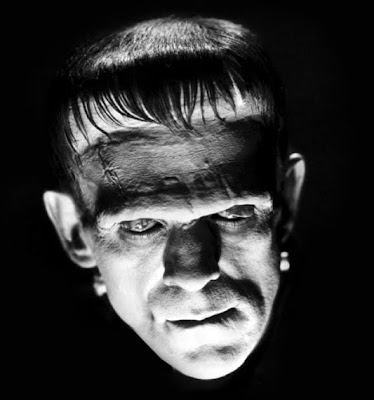 I was surprised to see this particular still being used as the emblem for the blog's anniversary, because it was, for me, particularly right. When I first saw this still in FM, it was part of this captioned photo:

This is a picture of director Frank Capra! The caption in FM says the photo is from "a French magazine" and that it was captioned there as "The shadow of Frankenstein haunts the nights of Frank Capra." Neither magazine explained the link between Shelley's hideous progeny and the popular purveyor of "Capra-corn."

I digress. Anyway, as a child I was haunted by that picture--it seemed to mean that the Universal Frankenstein monster haunted adults as it did my daydreams and nightmares. That validated my love of the Monster to me--and Frankensteinia refreshes and validates that love now in my adulthood.

As poet Gerard Manley Hopkins once wrote, "The child is father to the man."

Congratulations to Pierre and his incredible blog.
Posted by Max the drunken severed head at 1:06:00 PM

The only link between Capra and Frankenstein I can think of would be "Arsenic and Old Lace" (Capra having directed the film version featuring the Frankenstein look-a-like character "Jonathan Brewster").

I can add a bit to Scott's story. The reason the character looks like Frankenstein is because Karloff played the role of Brewster in the original play.

Capra ended up casting Raymond Massey in the role in 1941 because Karloff was still playing the role on Broadway.

The seemingly anachronistic comment about the death camps may have to do with the fact that, even though the film was shot in 1941 and released in 1944, French audiences wouldn't have had a chance to see it until after the war.

Quote: The reason the character looks like Frankenstein is because Karloff played the role of Brewster in the original play.

And in both the play and movie one of the characters (Dr. Einstein, maybe?) says to Jonathan that someone thought he looked like Boris Karloff.

Quote: The seemingly anachronistic comment about the death camps . .

The death camps comment was from the FM article in which the Capra pic appears. It was called "Monsters Are Good For Your Children" and was written by a mom in response to comments previously published in the mag that were critical of FM's bad influence on kids.

Thank you, dear Max, for your kind words. You were the first blogger to acknowledge and encourage me, and you gave me my first link. I am proud to be one of your many friends. Your generosity is legendary. You are truly the Ambassador of Monster Kids.

It's great to have comments from smart and friendly people like you three! Thanks!