A man worth knowing: Mike Thomas 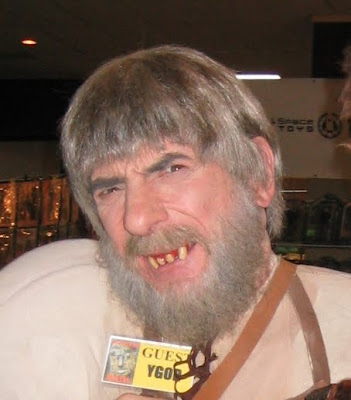 Mike Thomas, a professional makeup artist and actor, unexpectedly passed away the other day at age 59. I was very saddened to hear this, as I knew him slightly and thought he was a great guy. The many stories about Mike now popping up on message boards make me wish I had known him better.

Mike was a popular part of classic horror film conventions like the annual Monster Bash in the Pittsburgh area and the Chiller con in New Jersey. Providing excellent entertainment in his comedic portrayals of Bela Lugosi in his characterizations of Dracula and Ygor (as seen in the photo right, from Monster Bash, 2003. )

The soon-to-be released retro indy film House of the Wolf Man features Mike in his last performance, in a brief but serious turn as Count Dracula. A preview of the film can be seen here.

Everybody who saw Mike roaming horror convention hallways and introducing events as Ygor, or any of his other uncanny Bela Lugosi impersonations, knows that he just did the best Lugosi impressions EVER. They were better and truer to the original than most impressionist ever attempted, because Mike was first and foremost a lifelong classic horror movie fan who really studied the parts and worked on them. His knowledge of film makeup techniques and history was impressive.

Mike was also one of the funniest, sharpest people I've ever met, and he had his horror movie shtick down so cold that he could improvise hilariously IN CHARACTER -- imagine Bela himself in full Ygor regalia doing brilliant stand-up comedy and you'll get the picture.

A professional make-up artist since he was a teenager, Mike learned his craft from Dick Smith and other legends, plying his trade at the Metropolitan Opera House, on television shows like SATURDAY NIGHT LIVE (for more than 20 years, from the beginning), and on movies like THE SENTINEL (applying John Carradine's make-up), THE WIZ (teenage Michael Jackson's Scarecrow), WOLFEN, FATAL ATTRACTION and GHOSTBUSTERS I and II. 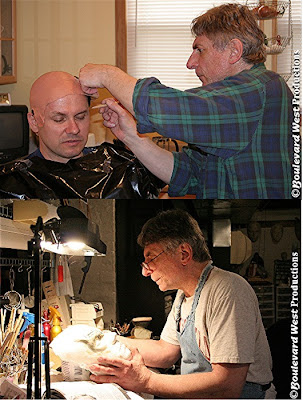 Along the way he did fun stuff like appearing in various monster get-ups, on Zacherley's Disc-O-Teen show in the 1960s (when he was a teenager), and, more recently, appearing as Ygor on Martha Stewart's TV show and making her up on camera as the Bride of Frankenstein. 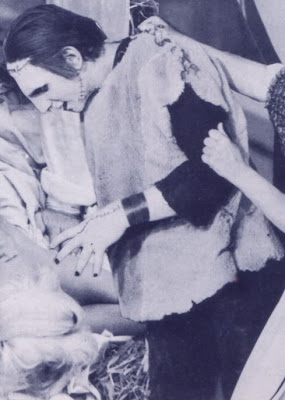 Horror film historian Tom Weaver remembers that episode: "There was a Halloween episode of Martha Stewart's show where Mike, made-up as Ygor, was making HER up on-camera during the show, as some kind of monster. Mike was doing his Ygor schtick, going on and on, and Martha was having trouble getting a word in edge-wise. And finally, in a voice that simultaneously put a chill in the air and made it clear she wanted him to stop, she said, 'Ygor likes to TALK a lot...' .

At the Classic Horror Film Board, Weaver commented on Mike's generous nature and make-up expertise: "Thinking about [Mike] last night, I recalled something I hadn't thought about in a long time (because I haven't listened to my WOLF MAN audio commentary in a long time)--what a huge help he was on that, giving me his theories on how the makeup, appliances, etc., were applied. We mostly remember Mike the Lovable Funnyman but when a subject was near 'n' dear to his heart, he was also quite the serious, professional expert." 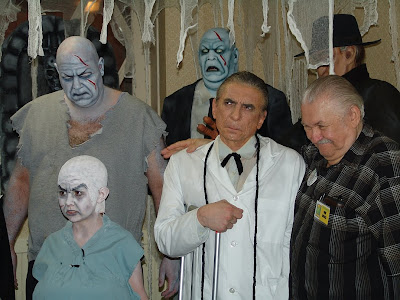 I love talented impressionists, and Mike was one of the best I've ever heard. Bela Lugosi wasn't the only dead-on impression Mike did. Mike seemed to be able to perfectly mimic any movie or TV star he attempted, from John Carradine, Christopher Lee and Sir Cedric Hardwicke to John Belushi. One of the high points of the 2003 Monster Bash for me was my private moment with Ygor when he looked around furtively, removed his upper plate of snaggly teeth to permit the proper elegant diction, and regaled me with his impression of Sir Cedric talking dirty!

Mike wrote to me and recounted telling the same story to a TV actress: "Several years ago, I was in the Make-Up Department at the Soap Opera, "All My Children," for about two-and-a-half years. One of the lovelier actresses was Gillian Spencer, who played Daisy Cortlandt. One morning, I came in with a copy of the MagicImage FilmScript, "Ghost of Frankenstein." Gillian sat in my chair to be made-up and saw the book. "What is that?" she asked, having noticed Sir Cedric Hardwicke's name on the cover. I handed her the book and as she flipped through the pages, she asked if I was a Hardwicke fan and I told her I sure was. "That's so nice to hear! Cedric was my uncle," she said. "We weren't blood-related - he married my aunt - and, oh, I adored him! He was just the sweetest man!" She went on to say that he'd had the worst case of emphysema (ever notice how many people smoked in those old films?) and I recalled that impersonation that I do. I asked if she'd like to hear it, and she giggled and said, "Oh, yes! I'd love to!" Well, I cleaned it up, for fear of really offending her and ruining a very pleasant acquaintanceship.

The G-Rated version went like this, "(Slow, laborious inhalation of breath) If you lie to me (long pause) you shall be hanged at dawn. But if you tell me the truth (pause), I shall do everything within my powah (pause) to see to it that Ru Paul (pause) rocks your world!" Ru Paul was actually making an appearance on the show that week. Gillian laughed a lot, much to my happiness - and great relief.

"The X-Rated version, which I stole, by the way, from the great Impressionist/Stand-Up Comic Adam Keefe, ends with, '...I shall do everything within my powah (pause) to see to it that Robert Donat (pause) sucks your c*ck.'"

This year Mike regaled me with a story from his encounter with John Carradine on THE SENTINEL set. Mike told Carradine that his presence in horror films elevated them tremendously, regardless of their production values. Carradine accepted the compliment gracefully and told Mike a classic old joke as an example of his attitude about that sort of acting job. The joke was about some hunters who had a rule that the first to bitch about the food would take over from the first guy cooking. All of the hunters were SO careful not to complain that the exasperated incumbent resorted to dumping moose dung in the stew. One of the hunters exploded, "This *!@%*!*! stew tastes like MOOSE FLOP!!!...BUT it's VERY WELL PREPARED!"

The really great thing about the story was that Mike told most of it in a letter-perfect impression of John Carradine's rich, deep voice. I was utterly astounded, since I'd never heard ANYBODY do Carradine before, and this was like hearing the Great Actor himself telling the joke.

I've read where Mike and a friend once did the Abbott and Costello routine "Who's on first?" at a party--only Mike performed it perfectly in the voice and mannerisms of John Carradine!

Mike was a man who had grown up with classic horror films and loved them; and in turn, because of his warmth, people loved him; he was one of the best "Monster Kids" out there. 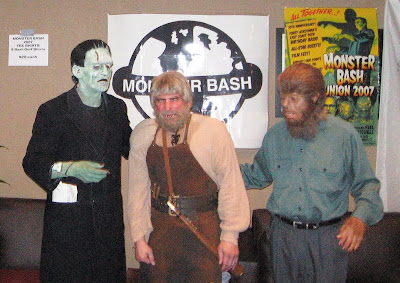 Watch Mike Thomas performing in a variety of roles in this tribute video by Charles Henson for this year's Monster Bash:


Special thanks to Robert Kiss for the FANNY HILL photos and to George "E-Gor" Chastain for the text. Other photos by Jane Considine and Max Cheney.

The Monster from the Fanny Hill film looks like Ed Payson in THIRD DIMENSIONAL MURDER.

Damn, how I wish I had met this man. Thank you, George, for the stories, and thank you Max for posting this.

I'm honored to be a small part of this tribute; it's me that Mike is working his art on in that pic from DEVIL.

There, and sharing panels at I-Con, where we met, Mike was every bit the joy & laugthter that all report.

But when you talked to him at length, there were also obviously largely unspoken depths and pains, too - that added salt to the blend.

A nice tribute to a wonderful man.
I cannot beleive it still.I was on the phone with him on Sunday and he sounded hale and hearty ,and we talked about his birthday coming up.


Mike was cremated and his ashes will be kept in his old makeup kit.
There will soon be a memorial at his home.

To send a sympathy card to his wonderful wife,
send it to

Good job, Max, Old Bean! How nice to check your site this morning and see the excellent job you did making something lucid from the raggedy raw material I gave you to work with!

A suggestion I think might be useful to people just getting to know Mike -- add these links (even if you have to replace the irrelevant "E-gor's Chamber" link to do it):

Obituary tributes posted at the Classic Horror Film Board:
http://monsterkidclassichorrorforum.yuku.com/forums/104/t/Final-Farewells.html

Pierre--You're right. Like the Payson Monster, Mike's design evoked the Universal Monster without infringing on copyright, but it's made much better than the Payson makeup, IMHO.

ARCHAVIST: I could not agree more.

Craig--Thanks for commenting. I'm glad that it's you in a pic of Mike working his makeup wizardry.

Kevin--Thanks so much for the address and the comment. I hope to see you at next year's Bash and we'll raise a toast to Mike.

George--Two of the links are contained in the article, but they can be overlooked, so I'll add them at the bottom, too. But I didn't know Mike had a website --that will be a very good addition indeed!

Thank you for helping me have a decent tribute to Mike, George. I'm very grateful.

P.S.--Pierre, I'm glad you liked the post. I, too, wish you could have met Mike.

The folks who come to Monster Bash are great people. Hope to see you at one someday.