And this very day I met her! Or the shade of her spirit, anyway--only hours ago.

Mary Shelley appeared to me during the witching hour, just minutes after my clock downstairs rang out its recorded chime at twelve. Yes, I saw her! Or at least I thought I saw her. I could not really be said to think (not the first time!), yet I saw--with shut eyes, but with acute mental vision--that pale author of unhallowed writing kneeling beside me. 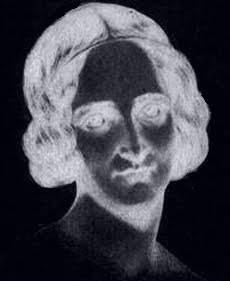 So I smiled and wished her "Happy birthday!" and she smiled a brief smile in return.

I remembered that she had written about people returning to life centuries later in Valerius: The Re-animated Roman, and in an essay called The Reanimated Man, so I asked her if she liked the changes in the world since her time on Earth. To that she only lowered her gaze.

Then, thinking of Frankenstein, I asked her if she could now say whether there was any knowledge more valuable than love and sympathy. She seemed to look away, then I suddenly saw a small shape appear near her--I looked closer and it appeared to be a dark reddish-brown, leathery item, about the size of a fist. I had the impression it was very old. It swelled up a bit--then it suddenly faded away, as did Mary's ghost. Oh, damn, she disappeared too soon!

I felt a genuine loss...

Because I had a cake, and it was decorated with trick candles that won't blow out! Man, I was really looking forward to seeing the look on her face when the flames reappeared!

Read a virtual version of Frankenstein at this link--complete with the original illustrations and pages that 'turn.'
Posted by Max the drunken severed head at 2:58:00 AM

Thanks for the archive.org link. Isn't it amazing that someone from "Preservation Services" — of all people — would bang a date stamp right on the title page of a rare and very valuable book? Yikes!

I was startled by that, too. Disappointing, if ironic.

Thanks for the compliment, Pierre.