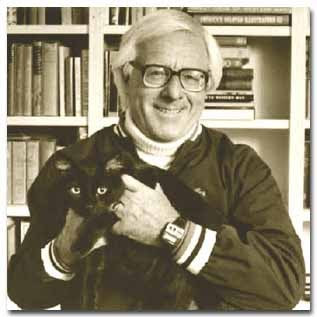 One of my favorite authors, Ray Bradbury, a master of the literature of the dark and the fantastic, turned 89 just over a week ago. I missed noting it here, sadly, but was overjoyed to see he enjoyed a fine party on his birthday. You can see a Facebook photo gallery of pictures taken at that party, courtesy of his friend Terry Pace, here. (You will have to log into Facebook to see it, however.)

Other than his own novels, stories, and plays, I can think of no better tribute to Bradbury than a celebratory essay written by my friend (and horror host) Joseph Fotinos, a/k/a Prof. Griffin. Here is his tribute to the author, written on the occasion of Ray's 87th birthday. It is full of references to Bradbury's novels and stories. Bradbury himself praised the piece, and described it as "full of wonderful, imaginative images."

An interesting fact about Bradbury: he is descended from Mary Perkins Bradbury, a woman convicted of being a witch at the Salem Witch Trials, but who escaped hanging.

It's Long After Midnight and the light in his Jack O' Lantern IS
STILL burning bright.

It's burned for quite a while, 87 years in fact! Cats sense it,
even though we may have missed it. His feline followers tiptoed
with lighter feet as the day approached. They yowl gleefully into
the night, while at the same time many miles away, a massive beast
from about 20,000 fathoms roars as the brightness in a lighthouse
keeps him company. The Beast weeps with joy.

Who could ever imagine a world without him? Who would want to? The
planet Mars shines even more brightly in the night sky because of
him and the smell of burning leaves seems to follow him somewhat.
Why even the Dandelion Wine tastes better when he's around.

Paper burns at 451, and the memories stay. Do you remember? Do you
remember the first time you read a sentence he wrote? The first
time you were carried away by his prose? I do. It was the revenge tale from The Martian Chronicles, Usher II.

Revenge for the ones responsible for the book burning of Fahrenheit 451, revenge against the ones who say what you can read and what you can't. Gothic macabre tales of mystery and the imagination, reaching up from the ashes like a Phoenix and punishing those who burned without reading…who destroyed without bothering to even see what it was they were destroying.

Stendahl was my hero, for he avenged Poe. Vincent Price was the natural one to play that role in my youthful imaginative eye. More's the pity he never did.

The Halloween Tree was next in my exposure to the world of the October King…I journeyed with Carapace Clavicle Moundshroud every year after that first encounter…every year. And every year, I still do.

My Jack O' Lanterns in my own homemade Halloween Tree will burn for him again this year. The wind that whips the trees in the weeks before year's end will have the chilling, thrilling sting that only his narrative can give it. There's something about the man.

Time passes and the moon rises and sets. Mechanical coffins work evilly long into the night.

He lives in the October country and as a youth, he gleefully pranked and grinned with his two partners in crime, Forry and Ray. They ran the streets of boyhood like cats, and dove and leaped, and rolled and shrieked, til their tennis shoes rotted off their feet.

He never drives anywhere, by the way. The master of science fiction, the dreamer of other worlds, never learned to drive a car. He refuses to even try, owing to a horrible car accident he witnessed as a boy.

What really strikes me is the candy corn soul that he instills in all his work. No matter what the tale is about, you can taste the wax lips, feel and smell the cold breath tinged with sweetness, and see the glowing grins. You can smell licorice and cotton candy in everything he writes. You know that the twinkle in his eye is the twinkle of a fire inside a pumpkin…a glimmer of orange warm light in the dark dark night.

I Sing the Body Electric!!

Can you hear now? Another burst of celebration and memory from the Dark Carnival…Calliope music is starting. Cougar and Dark's Pandemonium Shadow Show is springing to life, unfurling and setting itself up in the moonlight. Cotton candy is being sold while a twisted dwarf gazes with love and longing at his new self in a distorted funhouse mirror. A woman heavy with child glides by, with a worried expression; what is this thing inside her? There are crowds of people gathering, strangers of course, who seem to appear at the scene of every accident…. every death…the same people, all the time…

On the platform to our right, people gather to stare at the skin of a massive bald man. Posing and parading to the gawks and applause of the Autumn people, The Illustrated Man shows us moving figures on his very skin that tell even more tales…

We journey to the basement of a residential home, on Halloween night (naturally); a macabre game is being played in the dark…"this is the witch's heart"…. just make sure some idiot doesn't turn on the light!

Drew Erickson just inherited a farm from a total stranger!!! Now, if he could only let go of that Scythe…

Good men and women, talking excitedly, all gathered around to see the thing in The Jar…to try and determine what exactly it is…it looks vaguely familiar...

High above it all, Uncle Einar soars freely, his great bat-like wings filled with glorious air from the end of the year. He pauses to wave at a massive Pterodactyl kite, festooned with images of wild carnival animals, and trailing a tail made of Halloween boys…

The moon rises and falls..

The lights at the carnival are shutting out now, and the cotton candy is gone…

My heart and my soul have been made greater through his presence on the earth. I weep with joy each time I fall under his spell. God blessed us all when he gave Ray Bradbury his gift. Let's
continue to treasure his work, and honor him for what he gives to us all so freely.

The music finally grinds to a halt and the Merry-Go-Round has skidded to a halt. The Dark Carnival is over. Only a lone wanderer remains, dressed in black, with rolls of attraction posters for the next show under his arm. He wanders now from pole to pole, corner to corner, pasting up his posters. As he does so, he whistles a familiar tune...

"Now peal the bells more loud and deep,
God is not dead, nor doth he sleep;
The wrong shall fail, the right prevail
With peace on earth, good will to man!"

..the whistling fades as he wanders off into the night.

"God, here and there, makes madness a calling." -- Ray Bradbury
Posted by Max the drunken severed head at 1:17:00 PM

Max: Your friend the Professor has done a wonderful tribute. Yes, the "smell of burning leaves" captures Bradbury perfectly.

The first time Bradbury left me with mouth open? The short story, "Kaleidoscope" from the short story collection The Illustrated Man. Went on to read The Martian Chronicles, Something Wicked . . . etc, etc.

An author that absolutely shaped me as a boy growing up, and I still feel his influence and still love his work. -- Mykal

"The Lake" and "The Jar" were the stories that hooked me for life.