Only good for the bottles 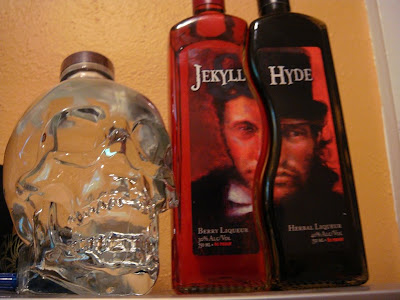 Ironically, the libations inside 'em are among the worst spirits ever made for human consumption!

The skull bottle on the left once held Crystal Head Vodka, whose taste has been compared to nail polish remover. (Still, it would worth buying just for the bottle.) 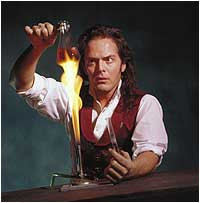 Next to the vodka bottle are the two bottles that fit together to hold Jekyll and Hyde liquors, marketed by Anheuser-Busch's subsidiary, Long Tail Libations. As this site describes the two-in-one drink, "Both bottles hold 750 mL, with one clear glass bottle showing the deep-red, 60-proof raspberry-flavored Jekyll, the other revealing the black, 80-proof Hyde, a black molasses-tasting product. When a bartender pours each into a shot glass, Hyde floats on top of Jekyll due to differing product viscosities and the amount of sugar in each." Another site, Liquor Snob, says the Hyde part is "herbal tasting;" the site The Bachelor Guy site similarly describes Hyde as "spicy."

Both liquors are pretty sweet. Feh. Manischewitz is cheaper.

Below is the original art that was designed for the malt liquor; the painting by illustrator Jerome Lagarrigue was adapted for the label of the 2007 Jekyll and Hyde form-fitting bottles: 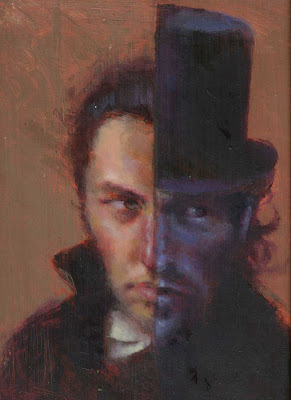 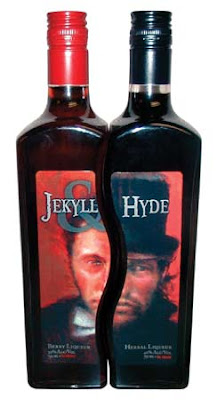 If you want drink recipes (like a Mary Reilly) that use Jekyll and Hyde, or a Jekyll and Hyde screensaver, go to the official website.
Posted by Max the drunken severed head at 12:41:00 AM

LOL! I hear ya!! I have the skull vodka (dangerous when mixed with Red Bull..I have the scars to prove it :D )....not impressed.....so not even going to touch the others.

Hard to resist around this time of year......

Disgusting as the contents sound, those Jekyll/Hyde bottles would be hard to resist :)

I will only drink it if I actually turn into Ms. Hyde.

the crystal skull did taste a bit nail polishy but the bottle is now one of my prized pocessions.

by the by i just gave yer blog an award. check my post dated 8/09 and claim it if you are so inclined. be well.

Man, I'm glad I'm not the only one who thought Crystal Skull Vodka was rancid!

That Jekyll and Hyde stuff looks interesting, tho...

It's Brad from I Love Horror. Just checking to see if you got Ash in the mail yet. Brittney from Day of the Woman sent it off a week ago. Let me know!

Woo! Just take the pictures when you can send them to me at bmchargue@gmail.com. When they arrive I'll send you the next address. Thanks!

Wow lol Its like a horror version of a Miami vice... :D jk Im gonna keep my eyes open for that and some colt45

I picked up the Jekyll and hyde on bottle alone, and can't even look at them after drinking them. Wife wont let me get rid of them. If you want the bottle just pour it out don't drink it