Frankenstein and the Clintons 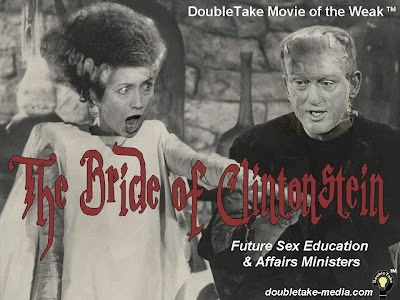 It seems Chelsea and Bill Clinton spent some time thinking about Victor Frankenstein, according to the Associated Press. (I tried calling my friend Pierre of Frankensteinia yesterday to tell him the news, but he wasn't at home. Guess I'll just have to scoop him.)

During President Clinton's terms in office, Taylor Branch, a Pulitzer Prize-winning historian and a long-time friend of Clinton's, spent many hours taping conversations with the President at the former Chief Executive's request, partly to record Clinton's thoughts and opinions for future reference by the President, and partly--apparently-- as an exercise in unburdening himself.

Now Branch is set to publish a book based on those recording sessions, and there's an anecdote involving Chelsea Clinton and the novel Frankenstein. According to an AP article,

"On the night of the Oklahoma City bombing in April 1995, the topics between Clinton and Branch included...then-Pakistani Prime Minister Benazir Bhutto's appeal to win delivery of more F-16 fighter jets and the legislative strategy of the new GOP House speaker, Newt Gingrich.

Then Chelsea, the Clintons' daughter, hovered at the door. She was writing a paper for her sophomore English class to describe the best and worst qualities of Dr. Frankenstein in Mary Shelley's famous novel, but she couldn't make her points fit on a single page, as assigned.

"He's reading it, and then he asked me to read it and what did I think? And where could it be shortened?" Branch recalls. "I've got the tapes going and I'm wondering, 'Am I going to be able to get back to the stuff I'm supposed to be doing? And will historians of the future think I'm an idiot for getting sidetracked off of these things with the president of the United States to be critiquing this homework assignment on … Dr. Frankenstein?' "

I'm no historian, but I don't think he was an idiot. Given the sometimes horrible consequences that result when power and good intentions are combined, any politician thinking over and discussing Frankenstein's flaws and strengths seems a good thing, to me.

The image at the top of this post I found at the website Double-takemedia.com's "Movie of the Weak" feature, which tweaks old movie stills and posters to insult politicians of both parties.

Interesting piece of information. Thanks for sharing.

That picture made me giggle!!!