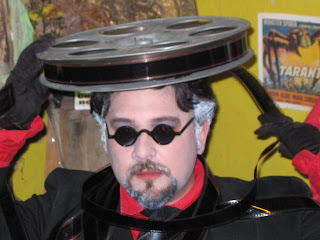 As you can see from the column on the right of this page, I like to post Halloween memories by notable friends, fans, and folks with a connection to horror.

Today I'm pleased to share some seasonal recollections of Joseph Fotinos, also known by his horror host persona of PROF. ANTON GRIFFIN (seen right). For many years his show, THE MIDNIGHT SHADOW SHOW, was a spooky staple in Texas for late-night horror movie addicts.

Today, as I write... I'm deep in Trick or Treat mode…deep in the belly of Halloween mania…and my head is awash with magical memories of my childhood. 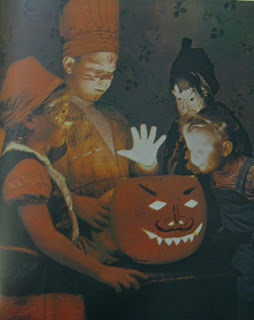 I clearly recall stalking my neighborhood AFTER DARK...with a group of my friends, no parents. My brother and I and about 7 or 8 neighborhood chums. We all stayed together, huddled in a group and excitedly went trick or treating on our street and at least two streets over.

It was thrilling as we took turns scaring each other and naturally there was the abandoned house in the area that everyone thought (no, that everyone KNEW) was haunted. Naturally, we broke in and investigated as adventurers with costumes coming apart and trailing off our bodies, and flashlights in hand.

Oh, I have some vivid Trick or Treat memories, and this month above all others stirs the fog to reveal a mood, a feeling, a color and a smell.

One of my favorite Halloween memories deals with perception. I recall being free to roam the streets on Halloween night like a pack of wild dogs. That's what we were...back then. Wild Dog-Boys on Halloween. We roamed the dark streets of my childhood neighborhood in Houston, Texas and there was never a fear of danger from the living…only the dead (and undead).

I recall a house, dark and gloomy, with a eerie red light from inside. We rang the doorbell and all shouted together in sing-song, the magic words...the words of power...TRICK OR TREAT!

There we were, the group of us boys huddled together waiting for SOMETHING, waiting for doom...not daring to breathe...but breathing as one. The door opened slowly...the red light from within spilled onto the walk where we were clustered...a mass of boys.

From the gloom within, a massive figure emerged. The silhouette grew larger as this giant from hell approached the door. Gazing up at him, impossibly huge in the night, it washed over me in a flood of terror that this giant, this monster whose attention we now had, had TWO HEADS! Yes, as God himself is my witness...the gargantuan beast that slowly strolled to the door in that hellish red light had TWO HEADS!

Strangely, we did not flee into the night, but we were all on the verge. You could feel it within us all...the energy was like a spring, coiled and tense...ready to burst free at the slightest movement, the lowest growl from one of the heads. The monster seemed to sense this, and moved very deliberately and slowly, he reached over inside the doorway, where we couldn't see...(What was he grabbing? An axe? A meat cleaver? A scythe?)...and produced a large bowl.

Like sheep, we moved CLOSER to this monster and seemingly in the blink of an eye, we all had another treat in our bag. The two-headed monster retreated back into the red red light from inside that house...that house of horror.

We all ran...we ran not with terror..but with thrills. We ran urged on by the energy that encounter had given us. All of our hearts beat wildly in our chests, but it was not fear. It was...
Exhilaration! 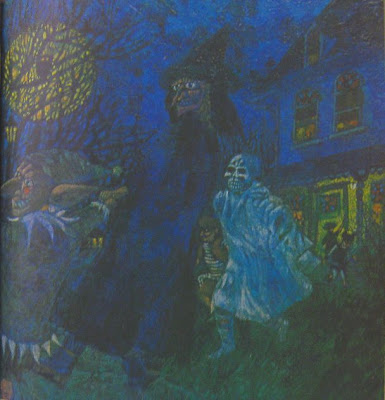 We were out in that wonderful dark night for what seemed like hours...it was wild abandon...we ran, we sweated, we ate candy as we traveled...we breathed hot chocolate breath inside our latex faces and we thrilled to soft blowing of the night.

Now, in my neighborhood in Austin, there are still large groups of kids that travel at night, (thank goodness) in costumes and with flashlights...houses are TP'd still, and the occasional jack o' lantern is smashed in the street...Halloween is a celebration of life by embracing death on that one night. And it's a night to give ourselves cold dire dread...because it's fun.

Every year I great the trick or treaters with some bizarre monster, some creature. Our house is lit and warm, a beacon of welcome. But just off to the side, is the graveyard. Eerily lit with green light, fog hovering on the ground, and flickering candles in front of each tombstone. A werewolf, a zombie, a ghostly caretaker, and a living mummy have greeted those brave enough to enter the doomed resting place of the dead.

This year, a twisted nightmarish SCARECROW will stalk out of the dark towards them. Oh, they'll scream...and jump, and jolt and cringe...

And they'll be filled with exhilaration.

I just LOVE the fact that Halloween is the ONE night a year that it's OK to knock on strangers doors and visit. It's the one night a year that children, dressed in their best otherworldly disguise, can freely and with much blessing, wreak minor havoc in the world.

One night a year. One.

Halloween for me is also a gathering time and my family comes together to consume delicious food, cakes and pies. Grandparents, Uncles, Brothers, Friends…all come home. A homecoming…a holiday extravaganza akin to Christmas and Thanksgiving…but ever so slightly tainted with the gruesome glow from a pumpkin's face. A glow that reminds us that death is there…always, and he's not against us. He's on our side.
Posted by Max the drunken severed head at 1:38:00 AM