Or some recent news might have you think so.

According to a news item at the TIME magazine website, "kids who eat too many treats at a young age risk becoming violent in adulthood."

TIME was being misleading with an oversimplified lead. A British study led by Dr. Simon Moore (who lectures at the Cardiff University School of Dentistry) found a high correlation between daily candy consumption in children and adult violence later: "69% of people who had been convicted of a violent act by age 34 reported eating candy almost every day as youngsters; 42% of people who had not been arrested for violent behavior reported the same."

Don't believe everything you read--even with these eyes: 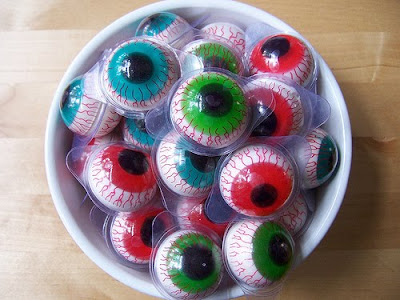 As an alternative to this depressing news, I suggest reading this fantastic book and visiting this great site. 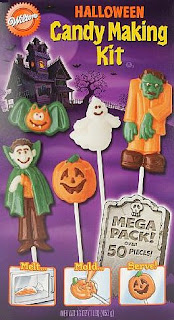 I wonder--if you had a Halloween junkie like me for a kid, and your kid used the kit seen right to make his/her own candies, eating them often, would that kid be more likely to be violent? It isn't the candy, is it? I think it's the mindless consumption resulting from stress that goes hand in hand with poor impulse control. Like with zombies!

Jane made these Frankie and vampire candies for the dessert party we threw for friends at the Monster Bash con in June. They were easy to make, looked good, and tasted good too. (I really was expecting a cheap synthetic flavor, but no--I was surprised! They tasted good! Oh--I said that already.)

How well do you know your candy? Take a Halloween candy quiz here.

Learn how to make this black rose candy bouquet-- 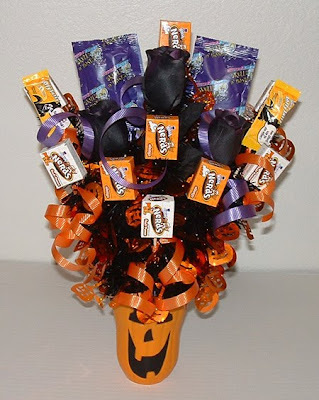 This sounds like the same spurious science that led to the crack down in comic books in the 1950s, because a fanatic with an agenda blamed them for causing juvenile delinquency. At a time when millions of comic books were being read per month, the fact that they were a common denominator between problem kids was not anymore unlikely than the fact that the kids also all wore blue jeans or drank coca-cola (neither of which was blamed).

I'm sure that 100% of violent individuals also drank milk and ate pizza and hamburgers as children and attended school. Why these things aren't being investigated as possible causes, I don't know, maybe it's because it's a stupid idea?

Perhaps a child who eats vast amounts of candy is an unsupervised child. The candy would be an indicator of parental neglect which, in turn, leads to serious problems.

Yes--the candy being a correlative factor rather than a causal one.