This year, thanks to two official dvd releases and two bootlegs, I was able to see four of the least-seen performances of one of my favorite actors, the late horror star Boris Karloff. These television appearances were on Studio One Presents, Suspense, Hallmark Hall of Fame, and Playhouse 90. All four performances surprised me, but for four different reasons, interestingly. The first one I saw was one of his worst; the next a good performance in a role he might seem miscast in; the third was a surprisingly restrained but effective performance in one of his most celebrated but least-seen roles, and the last one I watched was one of his very best, an excellent performance in a small dramatic role.

This is the first post about Boris' television work of a few I plan to do , and I might as well comment on the worst one now so I can focus on the good stuff.

Thanks to the Alpha Video dvd Golden Age Classics, I was at last able to see Boris play King Arthur in the 1952 Studio One Presents broadcast of A Connecticut Yankee in King Arthur's Court. Boris was 65 in 1952. I fully expected to see either a sage and regal elder Karloff, playing it straight in Mark Twain's light comic fantasy; or a comic "elderly-but-cute" old duffer turn, such as Boris gave us in films like Night Key or A Comedy of Terrors. 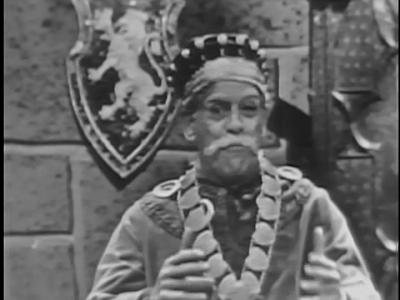 But instead Boris actually gave a bad performance. 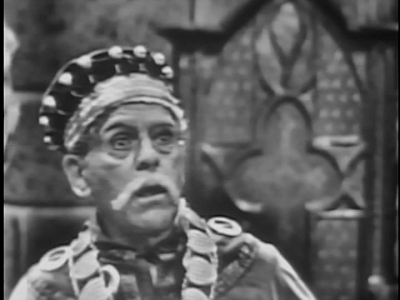 Boris didn't underplay, like he did in the phoned-in performance of The Climax, or overplay, like he has been accused of doing in The Lost Patrol. Worse, he sometimes didn't actually play at all, in a deliberate sense.

In roughly the first half of his performance, he can clearly be seen glancing at cue cards for support. Along with this distraction, sometimes he uses the reflexive, play-to-the-back-the-house gestures of melodrama, which seem not to be thoughtfully-considered mannerisms for the part, but merely stock posturing. I was embarrassed to see it. (The gestures might have been suitable for his role as the caricatured father "Mr. Darling"of the children's classic Peter Pan, but not here.) When you read accounts of Boris Karloff's life, over and over again you read praise from those who worked with him and knew him for his dedication, preparation, and thorough professionalism. This performance is uncharacteristic of all his other work. 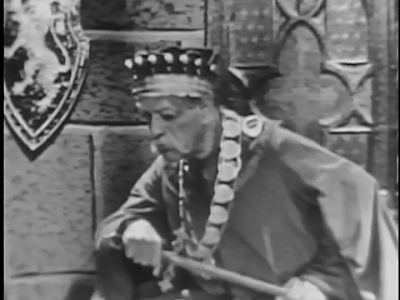 Given the short rehearsal times for live tv shows back then, I was tempted to think maybe he had been too rushed, but 60 year old star Thomas Mitchell has a considerable number of lines and never once appears to cheat with "idiot cards." 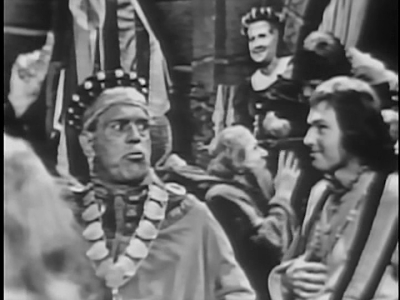 Above: Boris appears to rely on cue cards at times.
Karloff appears to recover by the second half, not looking anywhere but where his focus should be, without the broad gestures of before; his characterization is of an affable, slightly-self-important-but-not-real-bright old gent. Suitable to the light comic tone of the teleplay, if nothing memorable.

I'm gonna try to forget even writing about it!
Posted by Max the drunken severed head at 1:32:00 AM

Yay, Boris! Any and all posts you make about his more obscure performances are good with me.

Fortunately, he did so much good stuff that it's a surprise when you find a subpar performance. I'm glad I didn't have to sit through this one, though! You took one for the team.

I guess we can forgive one really bad performance. Wonder if he was on something at the time?

Very interesting tidbit you've brought up, Max. It's a shame seeing anything by Karloff being called terrible. But for an actor who set the bar so high, even the tiniest of problems seem glaringly apparent in his outstanding resume. Would love to see this just to say that I have. I could make a fortune selling "I watched Karloff play King Arthur and all I got was this lousy chain mail" merchandise!

Teeny-- Thanks! Yes, this one performance was uncharacteristic. And I can't be certain he's looking at cue cards, though it really appears that way-- he certainly glances repeatedly at something, and it would explain his poor playing in the first half. Live TV tripped up lots of actors.

I think its high time for a pie graph charting Boris' good, bad, and mediocre films!

I beg to differ with you Max.

Boris' worst work was as driver for the Helms Bakery in the Culver City of Los Angeles. Boris had a reputation for returning his truck in "a condition often significantly deficient to what it had been in when he departed." He also collected numerous citations for driving in two lanes at once, cutting people off, collisions, driving on the sidewalk, running lights and stop signs, and once driving across a private lawn.

One fellow driver, after seeing "Frankenstein" said "Karloff was more of a menace behind the wheel of his truck than as the monster in that movie."

It was Boris Karloff's driving for the Helms Bakery specifically, which led to the 1-800- How Am I Driving? hotline which you now see emblazoned on the back of all sorts of commercial vehicles.

Carl-- Would you settle for a Venn diagram in the shape of cakes?

John-- That's a reckless charge about a wreckless career!

Seriously-- I didn't know that. I don't think Karloff drove much after he became a star, but I'm not sure. One hopes he never hurt anyone-- but if he had, I suppose we'd all know about it by now.