Nearly a week after Halloween, a home repair website "connecting homeowners with contractors" sent a link to one of their articles. It was on what they thought were the "top 6" Halloween window displays found in stores in various large cities.

All of them were kinda odd. A few were traditionally scary, one was disturbing, one was kinky, and one was whimsical and mildly charming. The top one was a display by clothing designer Marc Jacobs that featured grue-splattered clowns, but also this scene: 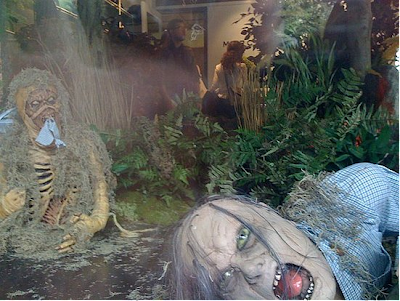 To see the rest of the weird window displays (and they aren't for kids!) go here: