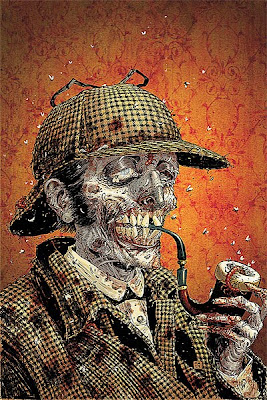 This is the cover art for Victorian Undead #1, a new Wildstorm comic seriesout now that pits Sherlock Holmes and Dr. Watson against Romero-style style zombies and androids. (Or "automata" as they are referred to in the story.)

Well, you can't say the folks at Wildstorm don't have a sense of humor.

DC, parent company of Wildstorm, sent me a copy, and I enjoyed it. It's over the top, and not something Arthur Conan Doyle would have approved of, but the story by Ian Eddington is just too wacky not to like, with good characterization and dialogue (even if more influenced by the movies than real accounts of the Victorian age.) The art by Davide Fabbri is among the best I've seen this year, equalled only by the art by Fiona Staples in North 40 and her contribution to the Trick 'r' Treat multi-story graphic novel. I recommend Victorian Undead--I'd grade it a solid 'B.'

A comic shop locator for Americans can be found here, or you can order it in the U.K. at this site.

A more detailed review can be found here.
Posted by Max the drunken severed head at 2:10:00 AM